A LAND BEFORE TIME – HLUHLUWE-IMFOLOZI PARK

A LAND BEFORE TIME – HLUHLUWE-IMFOLOZI PARK 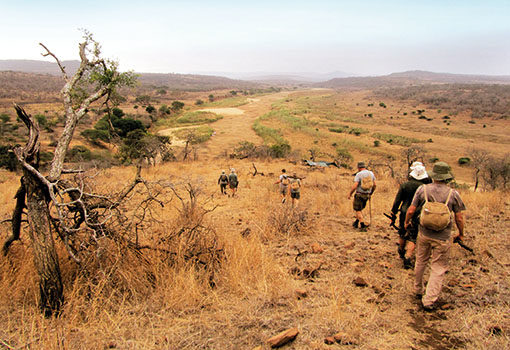 It was some time on the still, untamed side of midnight and I’d just been woken for my night-watch stint. So I joined my predecessor at the fire, listened to her account of the last hour (no dangerous animals and nothing to report but human snores and a chorus of frogs), and then shook myself fully alert. As she slunk back to her sleeping bag, I focused the torch beam into the distant blackness, despite knowing full well it was impossible to really discern what was out there. Then I added an extra log to the fire and tuned my ears to the frequency of the night.

The fire kept the kettle boiling for tea, a mild comfort in that lonely hour. More importantly, though, it alerted whatever might be out there to the fact that humans had set up camp, warning off all but the severely curious and the dangerously near-sighted.

With no electronic equipment or watches (other than one emergency cellphone hidden in our lead guide’s backpack), we had been shown how to determine the hour using the stars, divvying the sky into fistfuls of time. But when clouds moved in, I asked myself whether time mattered at all.

Every eight minutes or so, I’d take the flashlight for a reconnoitre of our camp’s perimeter, scanning pathways, peering into the distance for any signs of predatory lurkers or anything large padding in our direction. If something that could flatten our campsite or take a bite out of one of us should appear, I’d need to summon one of our Wilderness Leadership School-trained guides, Peter or Rodney, who always slept with rifles at the ready.

That very first night watch feels like an insurmountable responsibility and I spent the hour wondering if I would be capable, in the dark, of distinguishing between an elephant and a warthog.

During someone’s watch, a rhino at the edge of camp had been mistaken for a baby elephant. Rodney had shooed it away nonetheless.

Peter, whose relationship with the bushveld has a spiritual dimension, had given our party of seven a breathtakingly practical introduction before we had set off. As part of the oldest declared wilderness in Africa, these 30 000 ha – an unspoilt territory between the White and Black iMfolozi rivers that had once been King Shaka’s hunting grounds – possess one of the highest concentrations of dangerous large animals on Earth. ‘The eyes of all the dangerous predators will be waist-high,’ Peter had said. ‘If they’re closer to the ground, don’t wake us.’

Should ‘anything serious happen,’ said Peter, he would use the emergency cellphone, but if a threat to life or limb made medical evacuation necessary, it would still take several hours for the helicopter to make the journey from Richards Bay. We were now crossing
the threshold, said Rodney, into the real world.

The implications of going off-gridgot our hearts racing. The mandatory talk, Peter admitted, stirred potentially unnecessary fears, but it was simply the grown-up way of telling us to pay attention to instructions.

To reinforce the significance of our after-dark security, he told us of a ladyon night watch who had squatted to wee only to look up and see a nearby lioness watching her. Hours later, at dawn, she was found crouching in the same position, the lioness still staring.

As I estimated my eight minutes,I imagined the terror that must have paralysed her into that excruciating position and I shone the flashlight with added vehemence. My night watches were free of drama, instead, I was kept entertained by the distant roar of lions, deep-bellied guffaws of hippos and the crazy-laughing hyenas echoing through the night.

By day, we slipped into a very casual routine involving three meals, walking, napping under trees, and finding water for drinking, cooking and ablutions. We’d wake at daybreak, without alarms, and set up camp in spots that offered sumptuous views across pretty vistas. Soon, it seemed the most natural thing in the world to wake up to the action-packed drama of a nyala being chased by a pack of wild dogs, in turn being followed by scavenging hyenas, all of them being watched by vultures circling ominously overhead. Or to eat breakfast while watching elephants digging for water in the riverbed below.

Walks were slow and meditative: this wasn’t a series of hikes where covering distance or reaching your destination took precedence over the journey. We walked in silence, in single file, with a system of finger snaps and tongue clicks to catch one another’s attention when we caught sight of animals. We were there to savour the awesomeness of an unspoilt, primitive world. And, with each day came a deeper connection. There is this deep-seated familiarity, as if our DNA has encoded memories of how the world was before we conquered it, developed it, made it ‘civilised’. We are, in a sense, wired to feel the pull of the wild.

The very definition of wilderness, as we had been briefed at the start, was a place without human artefacts and no traces of our intrusion. We went to considerable efforts to eradicate every sign of having been there. We dug deep holes for ablutions, mixed fireplace ash back into the soil, covered any holes or trenches that had to be dug, and scattered unused firewood. Even all the holes we had dug with our hands in order to find the water for drinking and cleaning were filled in when we’d finished with them.

‘Because they weren’t here when we arrived,’ Peter said plainly, ‘and elephants like to dig their own holes.’

Digging to find water was not usually necessary in the iMfolozi. We, however, were there at the tail end of what had been an especially long, dry winter and the land had grown brittle and parched. In certain areas, we saw barely a patch of green, and life-sustaining rivers had dried up to snaking channels of sand, sparsely dotted with rapidly evaporating puddles of mud. I was struck by nature’s capacity to endure.

And, of course, by the magnificent, unfettered simplicity of it all. One of the great pleasures of dipping into this unmodified reality is the total absence of distraction – no electronics or traffic, no shopping, appointments, meetings, or work… No politics, gossip or even the news. What keeps you busy are the activities essential for survival. Moving from one overnight spot to the next, digging for water, making fire, cooking and keeping watch through the night.

When you’re fully aware and alive in the moment, your perception of time changes too. A day can zoom by in a blink and a moment of awe can stretch into eternity. By the flickering light of the fire, I contemplated many things and experienced life uncluttered by the ceaseless information, stimulation and noise of life in a city. That wilderness became a kind of empty canvas. And before I knew it had begun, another hour of night watch had ended.

Walks on the wild side

The Wilderness Leadership School (WLS), founded in 1963 by conservation pioneers Dr Ian Player and Magqubu Ntombela, is a non-profit organisation offering varying levels of outdoor experiences in wilderness and natural environments. The aim of these adventures is to help participants rediscover their relationship with nature by engaging with it on its own terms.

There are a variety of trails, including the wilderness portion of Hluhluwe–iMfolozi Park, which offers a chance to walk in the presence of the big five in Africa’s oldest game reserve. There are also walks going into Greater St Lucia Wetland Park, which incorporates five distinct ecosystems, and the uKhahlamba-Drakensberg Park with its rugged mountain ranges. These adventures set off from the WLS’s headquarters in Durban, while their trail in Botswana starts at Maun Airport.

Participants receive a detailed list of what to bring, but just as important is what to leave behind, including their phones and watches. Simplicity is key. You walk with only essential equipment and food, share cooking duties, sleep on the ground beneath the stars and bath in rivers. Trails are limited to eight and the emphasis is on self-discovery, personal growth and developing a deeper connection with nature and the environment.

The standard five-day wilderness trails cost R7 000 per adult, while the Wilderness Within trail, which focuses even more on the spiritual side of the experience, is R8 000.

For info or to book a trail with the WLS, call Janine Benvick on 031 462 8642, email info@wildernessleadershipschool.co.za or visit www.wildernesstrails.org.za. 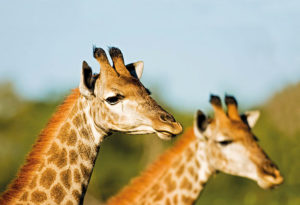 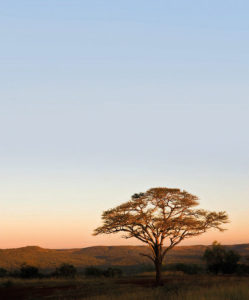 Sunset at Hluhluwe-iMfolozi is an unforgettable event 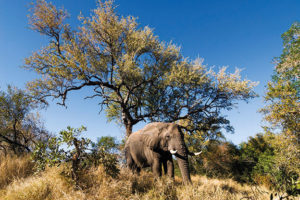 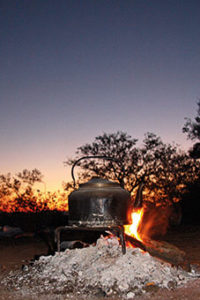