AGAINST ALL ODDS – RHINO SURVIVAL STORY

AGAINST ALL ODDS – RHINO SURVIVAL STORY 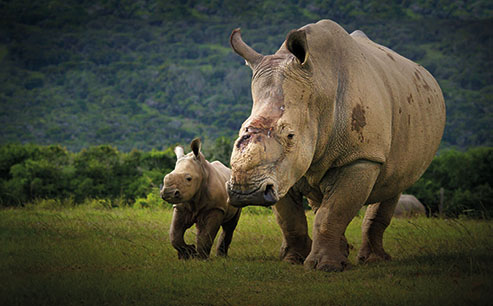 Poachers darted Thandi the rhino and cut off her horns at Kariega Game Reserve, near Kenton-on-Sea, in 2012. How bad were her injuries?

They were horrific – I could put my hand into the holes in her face where they’d hacked off her horns, leaving her sinuses exposed. One of the males was dead when we found them and Themba, the other, died 24 days later. We only discovered the massive extent of their internal injuries then. There was huge muscle damage from being down for so long.

What did you and your team do to treat her?

At that stage, there had been only one case of a rhino that had survived a facial mutilation like this. In the first phase of treatment, we stimulated the growth of new cells by removing dead tissue and controlling the maggot problem, and we filled the holes. It took a year for her to develop a big, fat scab as skin regrew over her back horn, but the front skin was weak. In phase two, the surgical team performed the first skin grafts on a rhino.

Where there any complications?

It was decided to replace the dead bulls 14 months after the poaching incident so the Kariega population could remain viable. We dehorned the new male first, as during mating they use their horns as a point of contact. Despite this, the amorous bull ripped Thandi’s face open. We continued with the skin grafts and were researching how to attach a protective plate when we found out that she was pregnant and decided not to risk another op on her, apart from once cleaning up the maggots on her face.

Tell us about Kariega’s happy event on 13 January this year.

Almost three years after the attack, Thandi gave birth to a little female. We named her Thembi, meaning ‘hope’ in Xhosa. Watching her playing is so endearing! And the noises the family make are delightful, soft sounds, like nothing you’ve heard before. Whale song is about the closest description.

Has there been any positive spin-off from what was otherwise an awful poaching event?

Thandi has become an icon for rhino survival and this has grown from a lone incident into a big drive, inspiring people to become proactive. It’s not just about giving money; it’s resulted in concrete projects. For instance, the Rooting for Rhino education programme is active in schools. We’ve also learned a lot more about rhino anatomy and other rhinos in similar predicaments have benefited from this.

The public has heard a lot about rhino poaching. What are you doing to counter ‘rhino fatigue’?

We have started a campaign to endear rhinos to people. We are recording the lives of the rhinos at Kariega with special video equipment that was sponsored by a university in Texas. Thembi is about to get a new playmate: a camera disguised as a large tortoise!

What kind of a future does Thembi face?

Unlike her mother, she is a normal rhino and faces all the risks of other rhinos with horns. The statistics are scary: poaching rates have doubled since three years ago when Thandi’s horns were hacked off. We’ll try to match this with increased security, but we’re now also tackling the problem with education campaigns in the East. Changing behaviour in other cultures is a huge challenge, but modern telecoms and social media make it easier to reach people.

Where do you stand on dehorning rhino to protect them?

It’s not a solution for the species, as it just displaces poachers to other rhino populations by taking away 90% of the reward. But it’s a tool to consider and all the Kariega rhino have been dehorned.

Want to pay a visit to Kariega Game Reserve? Check out www.kariega.co.za.

Download a rhino ringtone to help conserve these endangered animals, at www.cyberfari.com.

You can keep track of Thandi and Thembi on Kariega’s Facebook page, Kariega Game Reserve.

ROCK IN THE BUSHVELD – ROCK CLIMBING