HORSES OF ANOTHER COLOUR – KNYSNA SEAHORSE

HORSES OF ANOTHER COLOUR – KNYSNA SEAHORSE 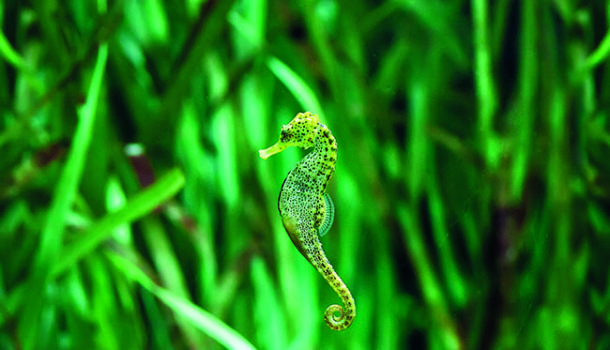 What’s so special about the Knysna seahorse?

It’s the only seahorse species in the world that is listed as endangered, and is found only in the Knysna, Keurbooms and Swartvlei estuaries on the south coast of South Africa.

Is there a link between their endangered status and their cuteness?

They have a head shaped like that of a horse and a tail like a monkey’s, and people do find them charismatic, but the very small distribution, minuscule population and their vulnerable habitat in eelgrass beds are what put them at risk.

Is it true that males give birth?

Male seahorses have a ‘pouch’ like female marsupials. The female lays her eggs in the male’s pouch and, when they’ve been carried to term, the babies hatch out of the pouch into the water. So yes, the male does ‘give birth’ to their offspring.

The Knysna Seahorse Status (KySS) research project is part of the Knysna Basin Project. Not a lot is known about these seahorses and their life cycles, home ranges or how many juveniles grow to adulthood. We are looking at Thesen Islands marina as a refuge for them, and comparing populations there with those in the open estuary. We’re finding the highest densities in the marina at depths of around three metres.

The marina was created artificially during development, and 25 ha of new aquatic habitat resulted. The rock gabion walls on the canals trap sediments and plants grow in them. An unexpected benefit is that this provides anchors for the little seahorses – they prefer to hold on to something. The horizontal lining, or Reno mattress, is similarly constructed and we are finding high densities of seahorses there, as they seem to thrive in a complex environment. They’re the only true estuarine species of seahorse.

What happens to them when the river floods?

Freshwater floods in the temporarily closed estuaries of Keurbooms and Swartvlei can cause major mortalities, because the water rises dramatically until the sandbank barrier is forced open. When the water rushes out, the seahorses are left exposed and the vegetation they live in is heavily affected. Fortunately, the Knysna estuary is permanently open to the ocean and is also much larger, which helps to dissipate flood water. This makes the Knysna estuary even more important for our seahorses.

Where can people see the Knysna seahorses?

In the small aquarium at the Knysna SANParks office, at the end of Thesen Jetty. The SANParks rangers are very well informed. It is a great way to see the seahorses and find out a bit more about them.

Why is it important to conserve Knysna seahorses?

They are a flagship species and people like them. And when you protect the Knysna seahorse, you protect the whole estuarine system on which many more species depend. The preservation of fauna and flora in the Knysna estuary alone would ensure that 42% of SA’s estuarine biodiversity is conserved.

How can the public help?

Stay away from the sides of the canals, don’t churn up the sediments and drive boats slowly in the marina. And please, don’t try to catch seahorses!

The Knysna seahorse was included on the IUCN Red Data List of 2000, making it the first and only seahorse species to be classified as endangered. They are green to brown in colour and live at depths of 50 cm to 8m, on sandy bottoms or around clumps of plants.

Seahorses have lived in the oceans for tens of millions of years. They are very efficient predators and are successful 90% of the time when hunting small crustaceans. They, in turn, are preyed upon by birds such as cormorants and herons.

AGAINST THE GRAIN
Copyright AA traveller 2016
Back to top