Into the canyon – Multi-day hiking trails

Into the canyon – Multi-day hiking trails 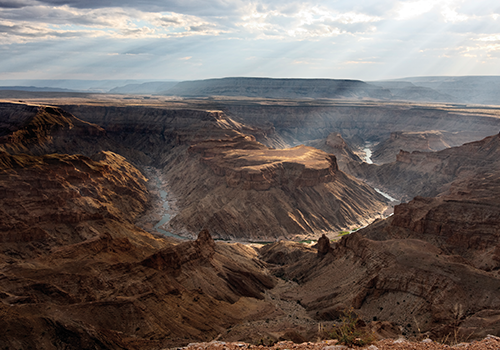 On Namibia’s Fish River trail, Keith Bain connects with the Earth and stars and realises that hiking, like any pilgrimage, transforms the soul

It was probably 2 am as I lay, snug in my sleeping bag, on the floor of Africa’s biggest canyon. Staring up at the inky sky, I wondered if those torrents of shooting stars weren’t in fact secret signals from the gods. Zipping through the atmosphere, some as big as rocket ships, I watched them burning out in fizzles of silent incandescence as suddenly as they’d appeared.

Metres from my head, the moon and stars glistened off the Fish River’s surface, bouncing back just enough light to read a book by. But that would mean missing out on the laser show in the sky. Instead, as I watched another round of intergalactic pinball, I listened to jackals howling, guessed at the source of some indistinguishable grunts, and tried to imagine the shape and size of the deep-bellied insect performing cacophonous imitations of cellphone ringtones.

When you lie wide awake like that, completely mesmerised by the world, it’s not insomnia. It’s an awakening, earned one step at a time.

It had started 550m up, staring down from the rim of the canyon, surveying the awesome crack that had, millions of years ago, ripped into the bone-dry, barren thirstland of southern Namibia’s Richtersveld. The Fish River Canyon – among the world’s grandest – is riddled with swooping channels and immense gorges, quartz-veined cliffs and mottled dolerite slabs, towering coffee-coloured rock fingers, river-smoothed pebbles and flat sandy beaches. It’s hard to remain unaffected by such a sight, even more so by walking through it.

The initial chain-abetted descent into the canyon is a knee-quivering introduction to the days ahead. But, as the climb starts to level out after an hour or so, there’s a sense of arrival in some otherworldly place, heralded by the call of a fish eagle and welcoming grunts from unseen baboons. I’d been expecting a moribund wasteland. Instead, I was struck by the immense tranquillity. We celebrated our accomplishment so far by lolling on a golden beach and plunging into the river, whose zigzagging course we were about to follow, give or take a few shortcuts.

To start with, the canyon is fairly narrow, hemmed in by steep walls that offer visitors little choice but to follow the meandering trajectory of the river, scrunching along sandy shores, every now and then bounding over rocks. Later on, the rift widens dramatically – up to 27 km in places – revealing a vast world where the waterway does horseshoe twists and the rocky sides resemble panoramic mountains with flattened buttes and plunging drops looming above huge plateaus.

Sometimes, the terrain is Africa’s take on the Wild West. Yet, amid this stark wilderness, weathered and baked over millions of years, dotted with slabs of pink feldspar, wild mustard bushes and time-smoothed boulders, we spotted a dainty klipspringer leaping up red rocks and occasionally paused to ‘ooh’ and ‘aah’ at wild horses (in turn watching us from across the river). Other times, the scenery is alien: a surreal desertscape of chipped rock and fine sand, chalky brown and grey, scattered with bedraggled weeds and scraggly, sun-scorched trees.

Making your way through this world, the sensation is of being unencumbered. Sure, there’s the weight of your backpack, a smidgen of clothing, a hat, a layer of sunscreen and your hiking shoes, but it’s the simplicity of putting one foot in front of the other and repeating, ad infinitum, that liberates. Whether you’re trudging along, whimpering with blisters, hating yourself for overpacking, or marching, chest-forward, mission-bound, there’s magic in the connection between legs and earth. The hard slog transfers energy up through the entire body until it clears and empties the mind.

Plus, there’s the joy of discovering suitable beaches to camp on, stowing backpacks and unfurling sleeping bags for a night beneath the stars. We would simply look for flat ground close to the river, perhaps where firewood was near at hand, and then spread ourselves out, prepare dinner, salve blisters and ready ourselves for our next dawn departure. Add in unceremonious wanderings into the distance for ablutions, equipped with a tiny shovel and – much more fun – skinny-dipping in the river with bars of biodegradable soap.

Still, our first night didn’t bode well. We found a perfectly fine camping spot on a flat stretch of beach, but so did a crazy wind, which decided to stay put, blasting us with a fine spray of sand that added texture to our food and exfoliated anyone who so much as poked a head outside their sleeping bag.

Having survived that, though, the new day – and each one that followed – felt like a miracle. Time disappeared, not due to overwhelming workload, deadline hustle or the race from one meeting to the next, but by the simple mechanism of being gobbled up by the wilderness.

Our crew also grew steadily more accustomed to the rhythm of hiking, aware of the magnitude of our situation. This was no place for dithering, dawdling or messing about – a fact that really hit home on our second day, when a hiker went missing. He first lagged behind, then – not noticing where we were all waiting for him – overshot us, causing mild distress. Search parties had to be dispatched in either direction, slowing our progress by several hours. It wasn’t a major disaster, but it brought into focus the canyon’s capacity for danger. After that, everyone reckoned it was safer to stick within sight of one another.

Our party intact, our second day took us to Palm Springs, where there’s an oasis of date palms around thermal sulphur pools, with steaming hot water pouring into the river. We wallowed in the muscle-relaxing mingling of hot and cold water, caking ourselves with mud like hippos, soothing our aches in the natural spa. We became children again – just as we did whenever we rode miniature rapids, letting the river bounce us downstream.

It’s hard to compartmentalise the hike. Each day had its physical trials – that’s the reality of any pilgrimage, that it involves effort and toil. But – serious accidents aside – there is little chance the burden will compromise the scenic splendour. Everywhere, the hard rock, dry dust and cracked, fissured surfaces are like slowly unfolding sculptures, the sun endlessly altering their colours, shifting shadows, deepening lines and adding wrinkles.

There were man-made landmarks too. The abandoned wreckage of a Vespa left during a crazy experiment decades back, the lonely gravestone of an unfortunate German officer, a concrete causeway and distance markers signalling each 20 km completed. Then, eventually, a dam wall and – like those fizzling shooting stars – it was over.

Reaching the Ai Ais Resort, I felt more regret than accomplishment. Regret that we’d finished, regret that more time had not been spent appreciating the details. Regret that I sometimes slept when I might have been stargazing.

The rush of honest, hard exertion and the thrill of the unknown were rapidly replaced by ease and convention: leaning across the bar for a cold beer, turning the tap for a hot shower. And, instead of celestial laser beams and rocket ships careening across the sky, it was back to the grid, where one flick of a switch brings the blackness to an end. 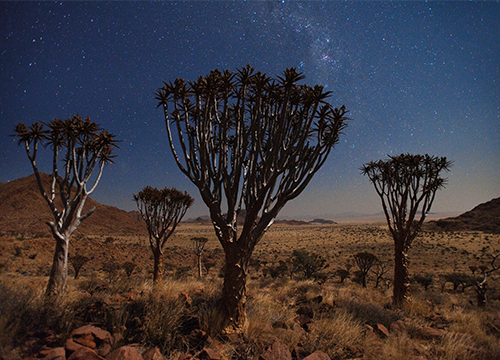 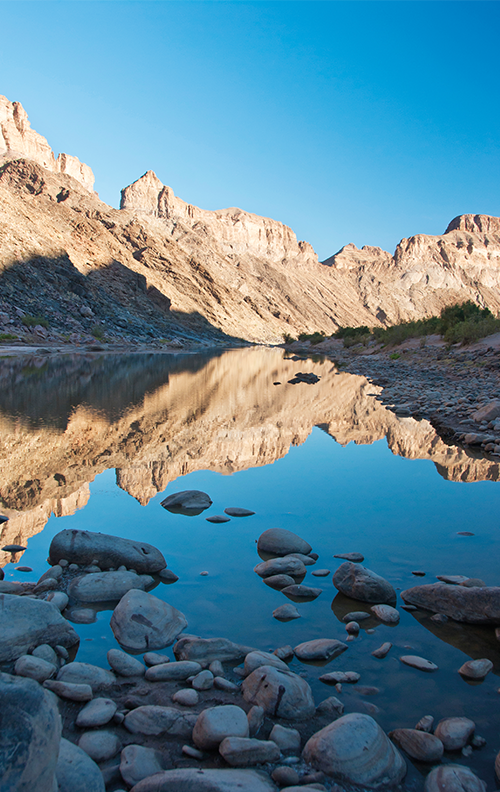 Our five-day hike took place at the start of the hiking season, which runs from May to mid-September. Daytime temperatures reached a peak of 37ºC, with perfectly mild evenings and even some light drizzle. In summer, besides the prospect of being cooked alive by the intense desert heat (the mercury can rise up into the high 40s), the real danger is that of flash floods. It’s no wonder the canyon is closed to hikers during these months.

In May, though, we had just enough water, enjoying deep swims in places and having to make almost 20 river crossings, for which water shoes were essential. If the river’s especially high, some crossings may require full-body swimming (and a waterproof bag for your backpack).

We were fortunate to have pleasant nights. In midwinter, temperatures can hit zero after dark – and bear in mind that the sun sinks early in the canyon.

Don’t think you can simply turn up with a backpack and set off. Many of these top Southern African trails are booked a year or more in advance.

As the name suggests, this four-day, 54 km hike is a perfect chance to spot the famous cetaceans from the shore (the best time for whale-watching is from June to November, when large groups can be seen at once). The route hugs the coast from Potberg to Koppie Alleen in De Hoop Nature Reserve near Bredasdorp, wending through fynbos and over limestone formations, with caves along the way. Besides marine mammals and sea birds, hikers should see a vulture colony and small antelope. Comfortable nights are spent in a series of cottages in pristine locations.

With caves, waterfalls and rock pools, this is one of the less challenging, more family-friendly walks in the foothills of the Drakensberg. Covering around 60 km
in five days, it crosses the nature reserves of Cobham and Garden Castle. It starts at the foot of the Sani Pass and ends at Bushman’s Nek Pass, from where some hikers continue into Lesotho. Overnight lodgings are in large, shared, rustic huts with bunk beds.

SA’s most famous multi-day trail covers 42 km in five days (with four nights spent in simple huts in fabulous seaside spots), following the Indian Ocean coastline from the Storms River Mouth to Nature’s Valley. Hikers venture along unspoilt beaches, hop over boulders and trek through fynbos and pristine Tsitsikamma mountain forest. Many find the long uphill sections gruelling, but they are rewarded with exhilarating vistas. If you’re lucky, you will see Cape clawless otters gambolling in the water and, from June to November, whales too. There are a couple of river crossings, including the notorious Bloukrans mouth, which are subject to tidal vagaries.

Traversing the entire length of the Cape Fold Mountains, this whopping trail initiative spans a mixture of nature reserves, wilderness areas and private land. The route incorporates high mountain sections, starting in the Cederberg Wilderness and crossing the Hex River and Langeberg ranges to reach the Outeniqua Mountains. No need to panic at the thought of hiking more than 600 km in one go though. The full trail can be broken down into more manageable sections of six to eight days, and there are bite-sized Weekender Trails too.

Starting from Maden Dam, this six-day, 100 km trail ends just short of Hogsback, taking hikers through thick Afromontane forest with countless rivers, waterfalls, rock pools and ravishing wild flowers and, sometimes, heart-stopping thunderclaps echoing through the valleys. With each day’s hike averaging nearly 17 km, it’s fairly hard going, but there are huts with water and toilets at the end of the day, and firewood is provided.

Christened with the original Khoisan name for Table Mountain, the full 88 km, five-day trail runs from the cliffs of Cape Point, along the mountain’s spine and across the peninsula, to the lower cable-car station. It’s the ultimate way to put Cape Town’s unique geography into perspective. Eco-friendly tented camps afford relative comfort along the way. As the route is unmarked, an experienced guide or good map is essential. The trail itself is free, but there’s an entrance fee at Cape Point and the camps must be booked and paid for.

Into thin air
Copyright AA traveller 2016
Back to top