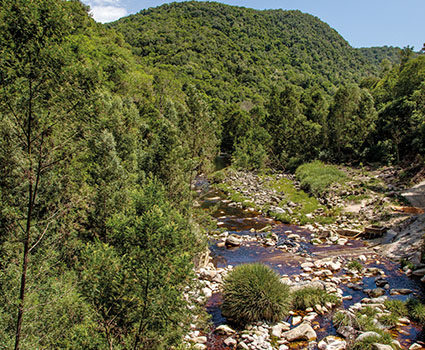 The Seven Passes route between George and Knysna is far more than a detour off the N2. It’s a day trip to be savoured, writes Garden Route local Jazz Kuschke

I had pulled over some 500m up from the well-known hairpin bend on the Homtini Pass, which famed local travel writer TV Bulpin referred to as ‘a classic piece of old time road making with dramatic views and the indefinable elegance of its curves…’ The Forest was dense, bathed in dappled summer dawn light and full of plants with names such as waxberry, white stinkwood, kamassi and Cape chestnut. Somewhere, a Knysna loerie hollered its raucous kok-kok kok-kok.

It was difficult to believe that, not too many kilometres away, on the busy N2 highway, holidaymakers in fully loaded SUVs were snarling at each other as they made their slow way home from summer vacations, with trailers, caravans and who knows what else in tow.

Perhaps, though, we should return to that same N2, for it is there that the context to all of this lies. The Garden Route N2 between Mossel Bay and Port Elizabeth has been an integral part of my life. There were the family holiday trips early on, heading from home in the Eastern Cape to go fishing with Grandpa in Hermanus. In high school, this stretch of road was associated with surf-contest trips – stressfully competitive missions down to Cape Town and Vic Bay. Then, as a student at Stellenbosch University, it was the way home during vacations – each landmark a step further away from the books and lecture halls.

The older I got and the more I drove the route, the more I started wondering about the back roads spidering off in all directions. I was intrigued by the area’s history and haunted by the Forest (which should always be spelt with a capital ‘F’, as in Dalene Matthee’s works). I found myself making forays, seeking glimpses without having to put in real effort or stretch out the trip home too much.

After numerous detours, I realised that it was possible to travel just about the entire Garden Route staying off the N2 (with the odd short transfer here and there). Bloukrans Pass near Nature’s Valley became a favourite detour. So did the historical Seven Passes route between George and Knysna.

In the beginning, I drove the Seven Passes purely for adventure’s sake – to explore the region via its delightful gravel roads, far from the tar that all the holidaymakers use. Now, as a resident of the Garden Route after too many years spent living in the big city, this 75 km road – which traverses Phantom Pass and Homtini Gorge and crosses the Hoogekraal, Kaaimans, Karatara, Silver, Swart and Touws rivers as they drain from the Outeniqua Mountains to the sea – has become a favourite day trip of mine.

Instead of the 90 minutes it takes to drive if you’ve got to be somewhere, my family and I often spend an entire day on the route. Let me explain why.

Driven from east to west, the Seven Passes starts with a right turn off the N2 immediately after you have crossed the bridge over the Knysna Lagoon. It does not take long to realise you’re away from the regular tourist rush. Although you’re not quite on to the first pass yet (and the road is still tar), it’s obligatory to slow down, shed that ‘getting from point A to point B’ mindset and switch over to pleasure-cruising mode.

Rather than a ghost, as most would suspect, Phantom Pass is named after the phantom moth found in the area. However, the pass is wound charmingly in mythology anyway.

The 7.4 km route from the Knysna River to the top of the pass and the tar road to Rheenendal takes more or less 10 minutes to drive. The pass is gravel and narrow, offering glimpses into the beautifully forested Knysna River valley on some of the hairpins.

On the tar section to Rheenendal, we always make time to stop at Spookasem, a delightful farm stall and the home of the Kamma Kamma (‘make-believe’ in Afrikaans) rag dolls. Then we eat brunch at The Red Barn at Fern Gully Farm, a little way down the road, where the kids can run around freely while the adults follow free-range bacon and eggs with artisanal cappuccinos.

After Rheenendal, you reach Homtini Pass, my favourite of the seven and the one where I always take time to pull over and wind down the windows to let in the sounds and smells of the Forest. Aside from the bridge (the original timber ones were all replaced with concrete in the early 1900s), the pass is as it was almost 150 years ago when it was constructed by master road engineer Thomas Bain and his brother-in-law, Adam de Smidt.

If the river isn’t flowing too fast, the brown waters of the Homtini (stained by the ubiquitous vegetable matter and roots) are ideal for a dip. The best place to stop is off the road on either side of the bridge; from there, follow the trail in whichever direction you fancy.

The next pass is Karatara, which has a sad history. This small settlement is where Knysna’s woodcutters settled after the abrupt withdrawal of their permits, and their livelihoods, in 1939 (ostensibly in order to save the indigenous forest). Their descendants live there still.

From here on, the route follows a pattern of pastoral farmlands on the plateau, pockets of forestry plantations, and then the spectacular, indigenously forested river valleys. The next valley is traversed by Hoogekraal Pass. The road was built by De Smidt in 1874 and – due to its less extreme gradient and height – was perhaps the easiest to construct.

After Hoogekraal, you reach the settlement of Hoekwil, a hamlet fast becoming trendy among urbanites in search of coastal country charm, as well as retirees.

From here, the route takes you on the Forest Road to George. Aptly, it’s named for the forest rather than the individual passes, as it takes in the gravel Touws River Pass (sometimes confused with the Duiwelskop Pass, a 4×4-only trail higher in the mountains), as well as the Silver, Kaaimansgat and Black River passes.

Those all still lay ahead. Right now, bugs and beetles of all manner provided an orchestral backdrop as the day began to heat and the Forest in the Homtini valley stirred. The dust two descending cyclists had kicked up earlier added to the scene. It all seemed straight out of Matthee’s Circles in a Forest – it would’ve been fitting if Oupoot the elephant had walked across the road right then.

Famed road builder Thomas Bain was commissioned to build ‘a proper road’ between George and Knysna in 1867. The route would be some 75 km long and traverse 10 rivers through seven major gorges.

Bain started at the Knysna end and his brother-in-law Adam de Smidt worked eastwards from the George side. The pair disagreed vehemently about the routing of the road, most significantly about the placement of the bridge over Touws River.

The disagreement was apparently so bad that they never spoke again. The road was completed, though, and was still used as the main route until the N2 was opened in 1952.

How the Phantom Pass got its name

Mulberry trees were found in the area, so, in 1881, British government advisor Henry Barrington brought in a group of 40 silk farmers from Italy to establish an industry.

Barrington, as it turned out, was no botanist. The local trees were wild mulberries (Trimeria grandiflora), and bore no resemblance to the European mulberry (Morus alba), so the silkworms had nothing to feed on. The Italians were left destitute and far from home and the mean-spirited Barrington refused to pay their return passage.

The story goes that a certain Victoria Esposito – an exquisite beauty – stole one of Barrington’s horses and rode for Knysna to find a ship to take her family home. As she reached the top of the pass, a big storm broke and she was struck by lightning.

Such was the force of Victoria’s beauty and bravery – according to the myth – that, instead of reducing them to ashes, the lightning turned her and the horse into moths. The hauntingly beautiful grey-and-brown moths still arrive in the area each spring, their wings marked with her brown eyes.

There’s a detailed information board at the bottom of each pass and ample signage ensures you won’t get lost. For a wealth of information on these and other passes, visit www.mountainpassessouthafrica.co.za.

If you keep a steady speed with no stops, it should take 90 minutes to two hours. I prefer to take most of the day, stopping regularly.

The route is mainly gravel, with the odd short stretch on tar. However, a 4×4 is not needed, as the road is graded regularly. Do drive slowly and be on the lookout for potholes and corrugated sections.

It can become rutted and slippery after heavy rains, so avoid adverse weather; you won’t be able to appreciate the view anyway.

Keep an eye out for mountain-bikers; there are various trails in the area and many cyclists use the route. For the best places to ride your bike on the Seven Passes route, check out www.gardenroutetrailpark.com.

The Millwood goldfields and the Big Tree at Woodville are both worth stopping for. See www.sanparks.org (Garden Route National Park).

Stop for brunch at The Red Barn, and have a browse through the farm stall and doll shop at Spookasem/Kamma Kamma.