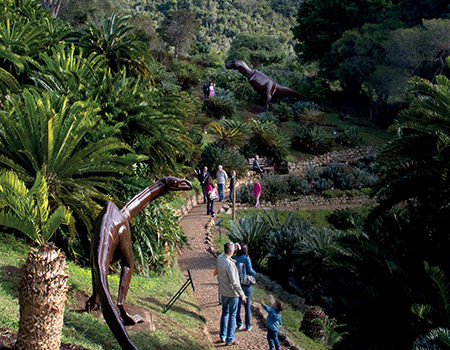 More endangered than rhinos, older than dinosaurs, cycads are one of the most threatened on the planet. Marion Whitehead spoke to Phakamani M’afrika Xaba, curator of Kirsternbosch National Botanical Garden’s collection of these rare and ancient plants

Just how long have cycads been around for?

They appeared some 350 million years ago and were dominant during the age of dinosaurs, and it’s assumed dinosaurs grazed on them. They are classified as gymnosperms and are the oldest seed-producing plants on our planet. The fossil records show that they’ve evolved over time, but retain the same features: separate male and female plants with a reproduction cycle of more than a year. They are one of the very few plants that have pollen with sperm cells that swim to fertilise the female ovule. They really are very special plants!

How rare are they?

There are more than 300 species of cycads in the world, with 38 living in South Africa. We are a cycad hotspot and they are most threatened here. In the past 20 years, numbers have fallen significantly, with three species now extinct in the wild and 12 critically endangered, which means they face a very high risk of extinction in the wild.

Why are they so threatened?

The biggest threat – 80% – is people stealing them from the wild for use in private gardens. Habitat destruction and harvesting for medicinal use are also factors.

Can mature cycads poached from the wild survive transplanting?

Like succulents, they transplant fairly well and that is part of the problem. In the early 18th century, many plants were collected for European botanical gardens and survived being shipped there.

What was the value of the cycads stolen from Kirstenbosch National Botanical Garden last year?

Traders price cycads by centimetre of stem and the rarer and bigger they are, the higher the price – anything from R40 – R6 000 a centimetre. The cycads stolen were worth around R700 000. We have now installed motion sensors in the cycad amphitheatre and all the cycads are microdotted so that we can track them if stolen.

What was the impact of the loss on the Kirstenbosch collection?

We had grown them from seed and we lost that genetic material. For instance, there are fewer than 80 Albany cycads remaining in the world and their genes are not represented in the wild, so this puts a big damper on our breeding programme. We record every plant’s history – where it’s from, how many leaf flushes and suckers it’s produced, coning cycles, and so on. So that’s years of work gone.

What can the public do to help preserve cycads?

Cycads are protected under CITES regulations and you need a permit to possess and grow them. I think cycads look better in the wild, but if you must have one, purchase it from a credible, licensed nursery or breeder that can provide permits. Make sure the seller is registered with the relevant authority (eg CapeNature in the Western Cape). Support the National Cycad Strategy, launched at Kirstenbosch earlier this year, to co-ordinate efforts in South Africa. Protecting them is not only for researchers and conservationists – it takes a community effort.

How can I tell if I am buying a wild, poached cycad?

Multiple stems and strange growth shapes in the wild are usual, but not always and are only rough guides. The main thing is to insist on a valid permit.

Kirstenbosch’s exhibition, Extinction! Dinosaurs and Cycads?, features nine life-size dinosaurs by sculptor David Huni, dotted around the cycad amphitheatre in Cape Town’s world-famous garden. It draws attention to the fact that many of South Africa’s cycad species are on the brink of extinction.