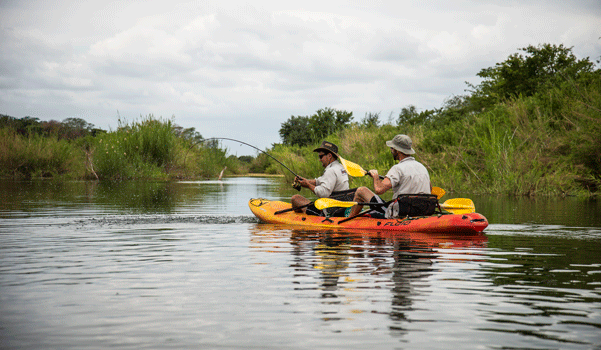 A canoe trail down the Rio dos Elefantes in Mozambique’s Parque Nacional do Limpopo is the perfect opportunity to build friendships and put fishing skills to the test. By Mark Samuel

The contest had already begun, and we hadn’t even climbed into our canoe yet. As we waded out through the shallows of the Rio dos Elefantes in rural Mozambique, my argument was irrefutable: ‘I should be in the back seat, because I’ve been paddling double sea kayaks for years!’

‘Well, my brother and I regularly take his fishing kayak around the tip of Cape Point… You know, the roughest stretch of ocean along our coastline, and I always paddle at the back,’ countered my good friend, Grant.

His claim seemed pretty reasonable, I thought to myself, as I plonked my bum down in the prized back seat.

With our eyes trained on the heavily vegetated banks – ever alert for crocodiles and constantly suspicious of disturbances on the water’s surface, or any other sign of hippo activity – we paddled out to the centre of the briskly flowing river, tracing our guide Janco Scott’s course.

‘Hippos are the ones we really need to respect.’

Like a goldfish in a tiny bowl, Janco’s words circled my head, there in that space reserved exclusively for fight-or-flight decisions. Despite the hint of fear, I had few doubts today was going to be epic fun – my heart for adventure is constantly at odds with my head, as well as with that more primal urge to not be eaten.

The real beauty of the Rio Elefantes Canoeing Trail is that it’s not a contest or a race; it’s not about exhaustive, all-out paddling. Instead, it’s about tranquillity, watching the bird life, drifting along on the current and soaking up a setting so far removed from civilisation thoughts of traffic jams, phone calls and neigh-bours’ barking dogs quickly dissolve like a Disprin-mended headache. Take along tiger-fishing rods and tackle, and your experience is just about guaranteed to soar to unprecedented heights.

With only one rod and reel in our canoe (yes, I was the chump who forgot his) and a prized lure that soon proved irresistible to tiger fish, the scene was again set for intense competition between Grant and me. (I may have lied about the trip not being a contest.) Think that fear of large animals is primal? The need to out-fish one’s buddy dates back to when humankind first discovered fire and how tasty cooked fish are to eat.

Since it was his gear and tackle, Grant went first, casting here and there, trying different techniques and doing everything he could to hook a toothy tiger. Despite a few clear bumps on the lure, nothing seemed to be biting.

I may be mistaken, but I’m sure the words ‘Let me show you how it’s done’ slipped out as Grant handed me the rod. Just between you and I, this was my first tiger-fishing attempt ever, so I am not certain of the basis of my confidence.

Yet, two casts later, totally unfounded arrogance for once transformed into finely honed skill as I hooked a big one that had the rod bending like a palm tree in a tropical cyclone. Fighting a tiger fish is exhilarating. Watching it breach the surface in a crazed tail-walk, toothed mouth agape, makes every minute of unsuccessful fishing you’ve ever endured in your life totally worthwhile.

With my prize catch eventually landed, Grant was now a distinct shade of green and I’d barely had a chance to carefully release my fish before he’d grabbed his rod back and started casting feverishly.

It didn’t take long for the next one to strike – to whoops of delight from both of us, and the thorough amusement of Janco. But, this time, so powerful was the fish that it towed us and our canoe around the river!

Seldom will you see two fully grown men acting more like sugar-high kids in a sweet store. After a marathon battle, Grant finally landed what must’ve been at least a 6 kg specimen – much larger than mine and big by anyone’s standards – and I hurriedly paddled towards the bank for the obligatory photo shoot. (Good thing I was in the back seat!)

Numerous caught-and-released tiger fish later, we were both deeply content and rather impressed with our newfound tiger-fishing expertise. So much so, we found it rather hard to restrain ourselves from offering helpful suggestions to our canoeing companions.

As the sun started its retreat towards the horizon, we took turns stealing quick and cautious swims to cool off, always adhering to Janco’s advice and constantly alert to potential dangers. We encountered no crocs or hippos during our day out on the water, but the wild nature of the river was revealed to us later that night from our riverside camp, when my torch beam illuminated five very large crocs patrolling the water right next to where we had beached our canoes.

Few activities are as rewarding and relaxing as a serene canoe trail along a river, and I’d endorse this trip to anyone. Try your hand at tiger-fishing too, and I promise you will have found your next outdoor passion.

Starting at the Eastern Cape coastal town of Kenton-on-Sea, you paddle 15 km up the river to a self-catering overnight hut. Equipment is provided.

Operated by CapeNature, this trail heads 7 km up the unspoilt Keurbooms River near Plettenberg Bay. The overnight spot, Whiskey Creek Cabin, sleeps 10 people and is equipped with a gas hob and fridge, crockery and cutlery.

The trail starts at the slipway in Cannonville, 38 km from PE on the N2 to Grahamstown. Covering a distance of 12 km along the Sundays River, it offers great opportunities for spotting birds and wildlife on the banks along the way. Overnight accommodation is in a log cabin with a boma braai area.

To experience the Rio Elefantes Canoeing Trail for yourself, contact Transfrontier Parks Destinations. They’ll make all the necessary arrangements, including telling you where to meet up with your guide and what you need to take.

This stretch of the Rio dos Elefantes flows through a remote area of Mozambique, within the Parque Nacional do Limpopo.

This is the Mozambican portion of the vast Great Limpopo Transfrontier Park, formed together with Gonarezhou National Park in Zimbabwe and Kruger National Park in South Africa. The meeting point for the trail is at Campismo Albufeira near the park’s Massingir and Giriyondo gates.

This is a malaria area, so consult your doctor about prophylactic medication. You should also use insect repellent. There is a risk of encountering hippos and crocodiles while out on the river, but listening to your guide’s instructions will keep danger to a minimum.

If you are planning on driving yourself to the park, you will need a 4×4 vehicle, or at least one with high ground clearance. Pack swimming gear and light, cool clothing for the day, as well as a warm top and long pants for the evenings. The sun is harsh, so be sure to wear a hat and use sunscreen.

Up close and personal

Go fly a kite
Copyright AA traveller 2016
Back to top