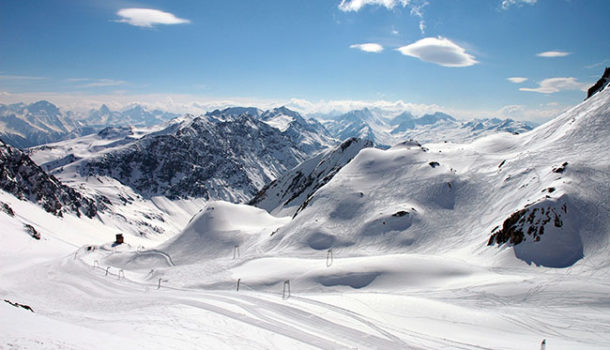 To most travellers, the wintry Alps are the ultimate skiing destination. Justin Fox, however, got to try out some fabulous alternatives in the Davos Klosters region of eastern Switzerland

One late-summer morning in Cape Town, we boarded an Edelweiss flight to Zürich. Ours was a motley crew, off to enjoy the winter delights of eastern Switzerland. Admittedly, it’s a pricey destination, though you can expect unparalleled mountain scenery and an efficient, functioning travelling environment –Switzerland is hard to beat.

After a daylight flight over Africa, we looked out on to a fairyland of snow-capped peaks. The Alps stretched away in an unending sweep of savage, sugar-coated beauty. Just then, the pilot announced our descent into Zürich. Soon we’d be down there, at play in the Alpine wilderness.

Zürich is an attractive, intimate city, prettily laid out around the shores of Lake Zürich and along the comely Limmat River. The sun was winter weak, but bright, and citizens soaked up its rays on the Utoquai and the banks of the Limmat.

We window-shopped among the astronomically pricey stores of the Bahnhofstrasse, then climbed to the tree-lined Lindenhof Hill, where men play boules and outdoor chess. Once a Roman fort, this attractive square is where the oath sealing the Helvetic Constitution was taken in 1798. The views of the spired city from up there were splendid.

A cobbled lane brought us to the water’s edge, where the medieval town’s stately buildings stood over their own colourful reflections. There was the Bavarian-style Rathaus and guild houses, the Wasserkirche and imposing Grossmünster with its Gothic towers.

Along the Limmat’s east bank lies the medieval quarter. We explored its narrow lanes, cafes and restaurants. It’s here that the likes of Trotsky and Lenin would hang out, rubbing shoulders with surrealist artists of the Dada movement plotting their absurdist protests to what they saw as the insanity of the First World War. 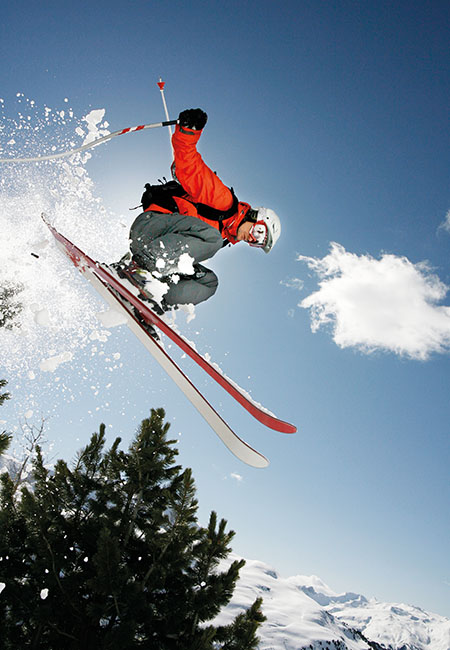 To the far east

With our Swiss Passes in hand, we boarded a train for the east. Reached in just over two hours, the Davos Klosters area is the main weekend destination for citizens of Zürich. The landscape quickly transformed itself into the Alpine stereotype of mirror lakes and snowy peaks. We passed into a winter wonderland of snow-bound hamlets, pine forests and gurgling streams of glacial-green water.

Davos is the highest town in Europe, best known for the annual World Economic Forum, when up to 2 500 grey suits descend to discuss pressing economic matters. For the rest of the year, the town is a magnet for those mad about outdoorsy sports and activities – from snowboarding, skiing and tobogganing, to ice skating, hiking and ice hockey. Davos is the slightly less glamorous, more urban cousin of nearby Klosters, which is favoured by the royals and celebrities who come here to frolic away their vacations in the snow.

First up, our guide and host, Martin Accola, took us on a tour of the town. It’s a bustling place jam-packed with restaurants, bars and designer shops, as well as a good number of discos and clubs for night-time revelry. Even the politicians need to let their hair down sometimes, I guess.

We headed up an enchanting valley to the village of Sertig Dörfli for lunch at the quaint Walserhuus Sertig Hotel: a meal of bratwurst, schnitzel, rösti and capuns, a traditional dish of sausage wrapped in Swiss chard, in a decadent cream sauce.

To walk off the hearty fare, we set off on a hike further up the valley. It was an idyllic meander through forests and farmland, all decked in snow. Marzipan cottages, a fairy-tale church and pine trees draped in icing. The silence was unearthly, snowflakes falling about us like dandelions.

Back in Davos, Martin felt that our lunch still needed some working off, so he suggested tobogganing on the Schatzalp. We took a cable car up the mountain, then hurtled back to town at considerable speed and with limited control. We played dodgems among the trees, racing each other round the bends, some of us screaming more than was perhaps necessary. 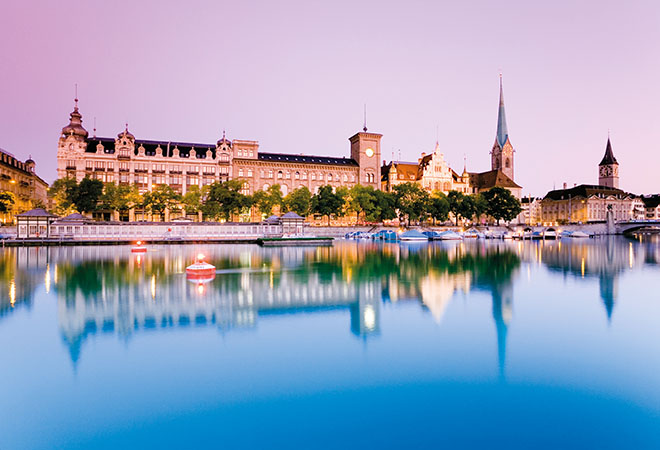 The evening found us at Hotel Alpenhof, a large Swiss cabin with a roaring fire and cheese fondues. Apparently, even Jacob Zuma has been known to eat here when he’s in town. We were graced with dish after dish of delicious local fare, created by Swiss-Italian chef Roberto Pirelli. Best of all was the lavish fondue. We ended off with a few too many shots of authentic home-made limoncello.

Keeping things sporty the next morning, we made our way to a Davos ice rink to try our hand at Bavarian curling. It’s more or less boules on ice. The aim is to get your ice stock (a weighted disc with a handle) as close as possible to a puck at the opposite end of the rink. The limoncello returned to haunt me, which meant I wasn’t at the top of my game. Alas, the boys were beaten by the girls.

On our last day, we drove to pretty-as-a-postcard Klosters. The village attracts many a celebrity and royal with its charm and chocolate-box looks. This is where a 14-year-old Prince Charles learnt to ski, and where William and Harry raced down the slopes as little ’uns.

From the nearby hamlet of Klosters-Monbiel, we hiked up a gorgeous valley that looked as if it came straight out of a fairy tale. There were pine trees dusted with snow, gingerbread houses and lofty peaks pressing from all sides. The trail brought us to Alp Garfiun, a stone restaurant serving traditional meals on a terrace with jaw-dropping views. Here we were introduced to Bündnerfleisch, air-cured beef similar to biltong, but not as dry, and wonderful local cheeses.

Piling on the Swiss clichés, a group of women started yodelling, their voices carrying across the valley. Just then, a horse-drawn sled with fur-covered seats drew up at the restaurant. It would have been cheesy, had it not all been so damn beautiful.

Out and about in Zürich

If you’re flying in and out of Zürich, you’ll no doubt end up with a few hours to spare. Check in your luggage and hop on the train to Zürich Hauptbahnhof. From there, you should do a town walk, taking in the east and west banks of the Limmat. Zürich has a number of excellent museums. If your time is short, visit the Swiss National Museum (cultural history through the ages) and Kunsthaus Zürich. The latter has fine collections of Impressionist, Dada and Modern art (look out for two of Monet’s vast water-lily paintings and some haunting Giacometti sculptures). 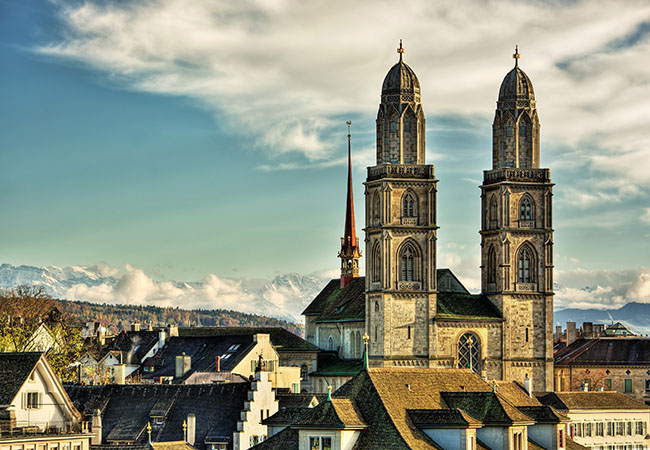 Getting there and around

You’ll need a Schengen Visa if you’re on a South African passport.

Edelweiss, Switzerland’s leading leisure airline, connects Cape Town to Zürich twice a week during our summer season (October to May). A daylight flight departs from Cape Town on Mondays, while the Friday flight leaves in the early evening.
www.flyedelweiss.com

A Swiss Travel Pass is the best way to get around. It offers great discounts and entitles you to unlimited travel on most train, boat and bus lines, as well as free admission to more than 480 museums.
www.swiss-pass.ch

If it’s perfect snow you’re after, December to April is best. However, Davos Klosters is a year-round destination: in summer, it’s hiking, mountain biking and climbing that take over from snow activities.

In Zürich, we stayed at the Hotel Bristol, a cosy, affordable hotel near the centre and within easy walking distance of the station.
www.hotelbristol.ch

Sunstar is a large, comfortable hotel set in parkland in Davos, with an indoor swimming pool, wellness centre, gym and dining hall with fabulous views over the town.
www.parkhotel-davos.sunstar.ch

A good bet on the guidebook front is Lonely Planet Switzerland. Useful websites include www.myswitzerland.com and www.davos.ch. 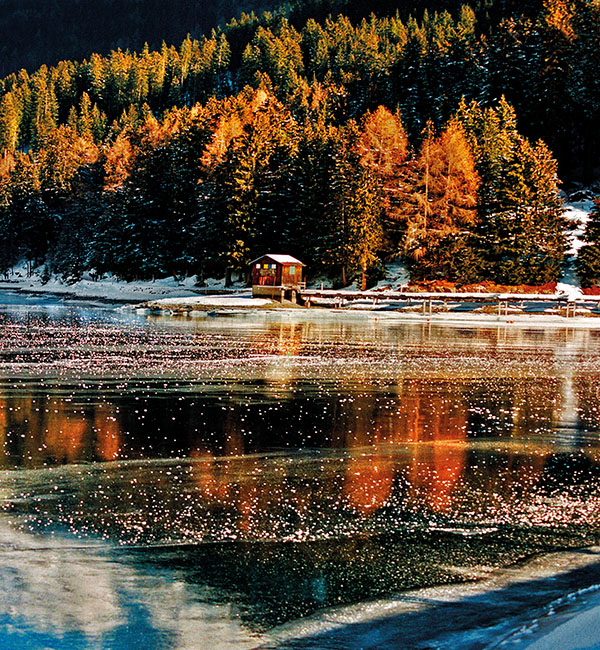 IN HARM'S WAY – ABALONE
Copyright AA traveller 2016
Back to top