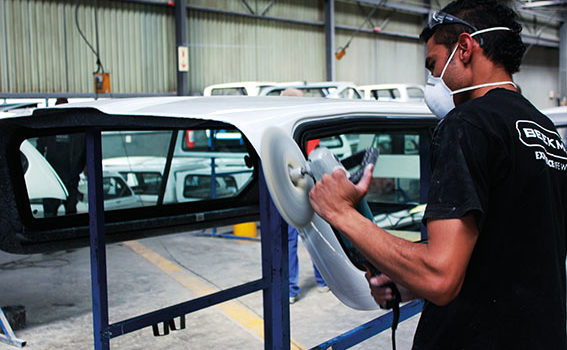 One canopy is pretty much the same as another. Right?

Regular readers of the magazine may remember a similar question being posed with regards to towbars. We then went on to explain why this is not the case. Some towbars are mere slabs of metal welded together, with a ball added on; while others are thoroughly engineered accessories designed from an early stage to integrate seamlessly and safely with the vehicle.

It’s no mean feat for a product to earn a Toyota part number. And it may mean the canopy costs a little more than other options on the market, but cheapest is not best when it comes to an essential component of your vehicle.

Compatibility between the base vehicle and the accessory is critical, in order to qualify for Toyota’s approval, with strict standards to be met. The ability to seal properly against the elements is one of the most important qualities. A properly designed canopy uses airflow to create a positive pressure (one higher than the ambient air pressure) inside the bak. This prevents dust ingress in even the worst conditions and also prevents any exhaust fumes from finding their way in.

Among the many other factors that need to be considered are dimensional accuracy, aerodynamic efficiency, quality of materials (including the glass), weight, and the ability to provide the same level of long-term performance as the vehicle itself. And don’t forget aesthetic appeal.

Toyota does not fit canopies on the production line, but rather offers them at point of sale. Dealers offer a range of approved canopies produced by a select few suppliers, designed to complement Hilux and Land Cruiser bakkie models, whether single- or double-cab, intended for business or pleasure.

If you purchase a canopy from one of Toyota’s approved suppliers, you can be assured that the design has been signed off by Toyota’s international parts and accessories department and the producer is willing to go to great lengths to satisfy both the internationally recognised ISO 9001 requirements for manufacturing policies, processes and procedures, and the company’s high standards.

The final arbiters of quality are Toyota’s engineering staff, both here and abroad. They subject prototypes to accelerated durability testing, doing their utmost to put them through more abuse than they will ever experience in the marketplace. The process includes testing in extremes of temperature, on- and off-road, in the wet and dry.

As with most suppliers of approved accessories, canopy manufacturers are part of the process well before the public launch of a new vehicle. For instance, by the time the next Hilux hits the market, canopy makers will have been involved in the project for more than two years, working to create a product in perfect harmony with the vehicle.

There are plenty of non-approved canopy suppliers out there, but let the buyer beware: barriers to entry in the market are fairly low, made lower by the lack of any legislation governing the manufacture of canopies. They are largely handmade, with fibreglass sheets placed into moulds in a labour-intensive process – so the skill and experience of the actual workforce, and the quality control, are critical.

Toyota’s network of 200-odd dealers across South Africa can supply a canopy for your new or used vehicle, and will outsource fitment to a qualified installer. And, depending on which canopy you opt for, it may be fitted in the dealer’s workshop or – even more conveniently – in your driveway.

Of course, canopies are tailored for specific applications, so those designed for leisure double-cabs and workhorse single-cabs differ. For example, a canopy fitted with roof racks allows you to easily add lifestyle accessories such as bicycle, canoe and surfboard carriers; fishing-rod holders; and luggage boxes. Alternatively, a canopy with a specially reinforced roof will enable you to safely use a rooftop tent on camping trips.

Interior lighting, tinted windows, air vents, curved rear glass, speaker boxes, colour-coding to match the body, and aerodynamically efficient flush-mounted sliding windows mean a canopy can add to rather than detract from the aesthetic appeal of your vehicle, while enhancing its practicality and versatility.

So, no, all bakkie canopies are certainly not created equal.