TAKE THE HIGH ROAD – MOUNTAIN PASSES OF THE EASTERN CAPE

TAKE THE HIGH ROAD – MOUNTAIN PASSES OF THE EASTERN CAPE 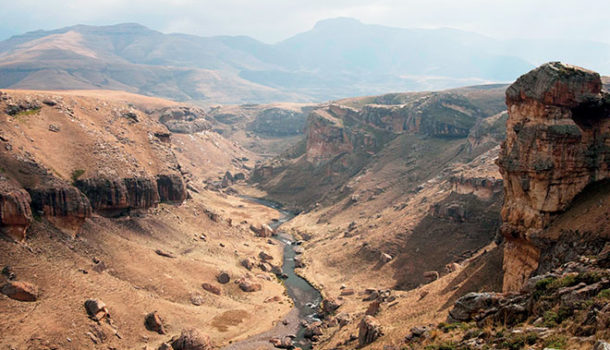 For pass chasers, Matatiele’s wild mountain playground in the Eastern Cape presents an array of routes, from the oh-so-good, to the not-at-all-bad, to the definitely-not-ugly.
By Marion Whitehead

Steep, winding roads leading to beautiful mountains are irresistible to pass chasers – you know, the kinds of people who can’t resist the magnetic draw of interesting routes. The fact that Matatiele has three passes over the Drakensberg into southern Lesotho right on its doorstep makes it a highly desirable, if little-known, destination.

All this used to be lawless frontier country, deep in no-man’s-land, where gunrunning, smuggling and cattle rustling were rife. Not too dissimilar from Clint Eastwood’s Wild West, I mused as I studied the map showing the roads over Qacha’s Nek, Ramatse-liso’s Gate and Ongeluksnek. Would high noon find me experiencing the good, the bad and the ugly on this trio of routes?

I linked up with Philip Rawlins to explore the three passes on a couple of his day tours from Resthaven, the guest house he and his family run in Matatiele.

We left just as dawn kissed the sky a golden hue, driving north across the wide plain towards the jagged Drakensberg horizon. The plan was to go up the pass to Ramatseliso’s Gate, linger in Lesotho and then return via Qacha’s Nek.

We headed out of the town on patchy tar towards Qacha’s Nek and at Maluti Service Station, Philip turned right.

There wasn’t any sign announcing the route to Ramatseliso’s Gate – it’s simply something you have to know. We drove on through what was once the Transkei on rutted gravel, past a Roman Catholic mission in a grove of trees and into the next valley, where a bus was collecting children for school from many small homesteads dotting the hillsides.

About 37 km from Matatiele, we reached the foot of the pass at a stand of bluegum trees. We snaked around the first hairpin bend and up a rocky cutting to arrive on a plateau where the magnificent mountain views had me thinking ‘not even a tiny bit ugly’. Then we were into the sandstone belt and more sharp curves.

‘It used to be accessible only in 4×4 vehicles, but since they fixed it up, any high-clearance vehicle can handle it,’ said Philip, his Land Cruiser purring its way effortlessly up the steep sections. ‘But it would still be quite challenging in the wet.’

The South African flag waved us a welcome when we got to the border post at Ramatseliso’s Gate up in the clouds. ‘Last clean toilets,’ advised Philip. There was no queue to get our passports stamped and the welcome was equally warm at the Lesotho side.

We turned right and headed towards Sehlabathebe National Park, one of Lesotho’s little-known secrets. But you need a good few days there to drink in the rugged mountain beauty and Philip took us to a cave big enough to shelter 3 000 sheep and their shepherds when it snows. It is a gaping hole in a cliff overlooking a sheer river gorge and the views were jaw-dropping.

We made a short detour to Tsoelike River Pass to picnic at the suspension bridge, built in 1930. It’s no longer in use, but the drive to the top of the Tsoelike Pass was a blast: one abrupt, bumpy hairpin bend after the other. I counted eight, but I may have lost count in fright when we encountered an oncoming 4×4 minibus taxi.

It was almost a shock to drive on tar again when we joined the A4 to Qacha’s Nek. This is the most commercial of the border posts en route to Matatiele, but even so, we hardly queued. This is also where the tar ran out.

We stopped twice on the corrugated, not-so-good gravel pass: to inspect an unusual rock painting of a serpent that Philip knows of, and at a strange group of castle-like rocks glowing golden in the setting sun. They had the air of an African Stonehenge and I could imagine tribal elders conducting rituals here.

Thick stands of wattle closed off the distant view of Matatiele as we started descending the pass. Back at Resthaven Guest House, the odometer showed me our day trip had been only 113 km, but we had packed a whole day’s worth of sightseeing into it. But the ‘big bad one’ was yet to come.

Ongeluksnek Pass is marked on maps as a provincial road that runs straight  through Ongeluksnek Nature Reserve to Lake Letsie in Lesotho, a Ramsar wetland that’s a favourite with birders. The drive, past the charming Mariazell Mission church and the starting point of the Mehloding hiking trail, is bumpy enough to make it unnecessary to step on a vibrating weight-loss machine for at least a year after travelling it. The road deteriorates further once in the reserve and by the time you get to the border post 64 km from Matatiele, it’s just a grassy farm track.

The policewoman on duty was glad to see us. ‘Most people are too scared to go up here. But not him,’ she laughed, pointing at Philip, who was opening the gate as we were obviously her first customers for the day.

We came to a steeper section of the track where even low-range 4×4s will regularly get stuck. ‘When it’s wet, you slide all over and slip into the sloots,’ explained Philip as he expertly dodged the dongas in the Land Cruiser. ‘You end up on your chassis, wheels churning mud uselessly.’

We ground up the pass using first and second gear. The condition of the so-called road was appalling and I soon dubbed it the ‘utterly bad’ of our trio of passes, but it was totally exhilarating at the same time.

Ongeluksnek pass – Afrikaans for ‘Accident pass’ got its name when the Griquas trekked down here in the 1860s on their way to settle around Kokstad. ‘One of their wagons crashed and a guy was killed when he was crushed against the rocks,’ explained Philip.

Mountain rhebok grazing near the ruins of an old farmhouse signalled the beginning of the top zigzags of the pass. We lumbered up it, to be met on the crest at 2 555m by a sentinel rock thrush sitting on a pole.

This is where you enter Lesotho, but there was no border post to be seen. Philip gestured casually past a flock of sheep to a group of ruined huts: ‘That used to be the Lesotho border post. The shepherds have taken it over.’

A fierce Anatolian sheepdog chased the Land Cruiser as we drove to the large alpine Lake Letsie. We crossed the overflow easily after a dry winter and while we sat eating our pastoral picnic, we spotted a bakkie driven by a local farmer. It was the only other vehicle we saw. Back at the SA border post, our friendly policewoman told us she hadn’t stamped another passport all day.

Returning after the day’s mountain splendour, our trip to the lake and back was less than 165 km, but we agreed Ongeluksnek was definitely the worst – and best – of Matatiele’s three passes. Certainly a contender for SA’s worst 4×4 pass once Sani Pass further north is tarred! 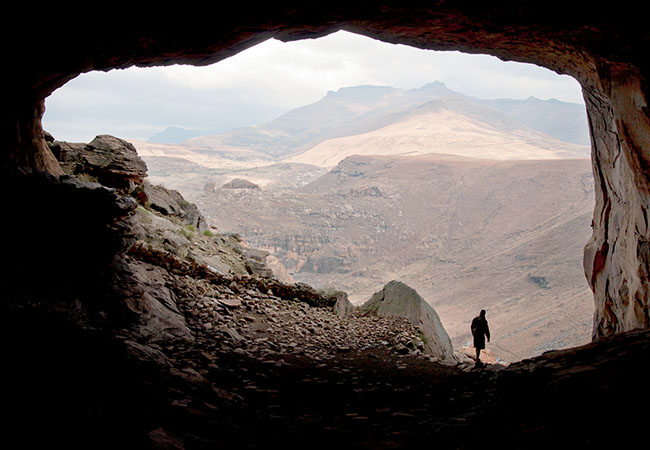 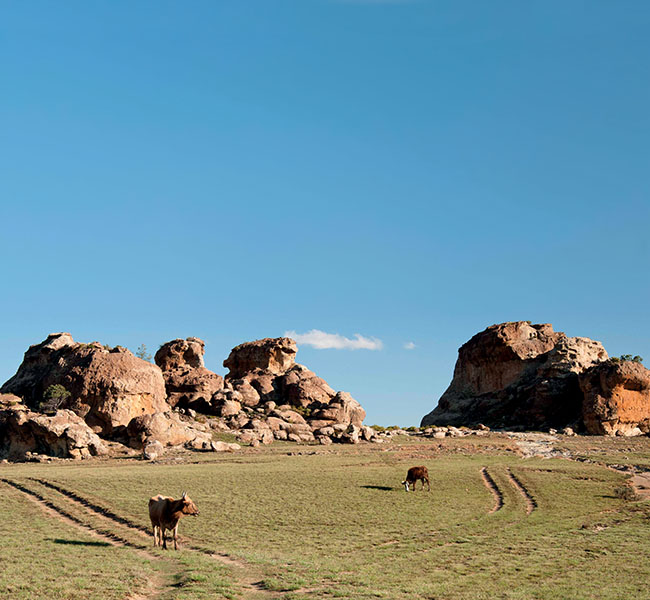 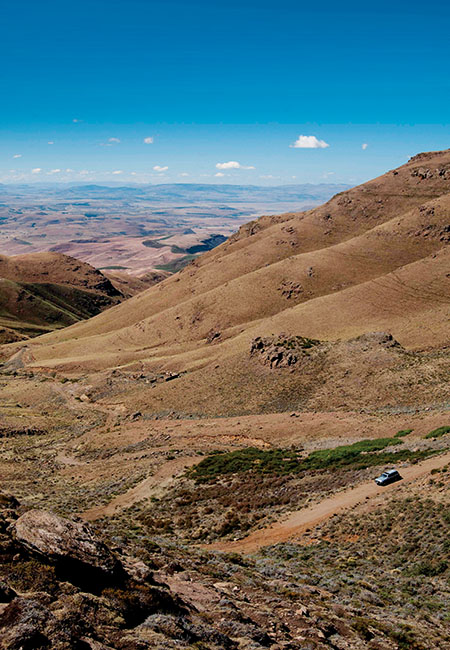 Route 56 is the shortest and most scenic route between KwaZulu-Natal and the Cape as it skirts the foothills of the Eastern Cape Drakensberg. 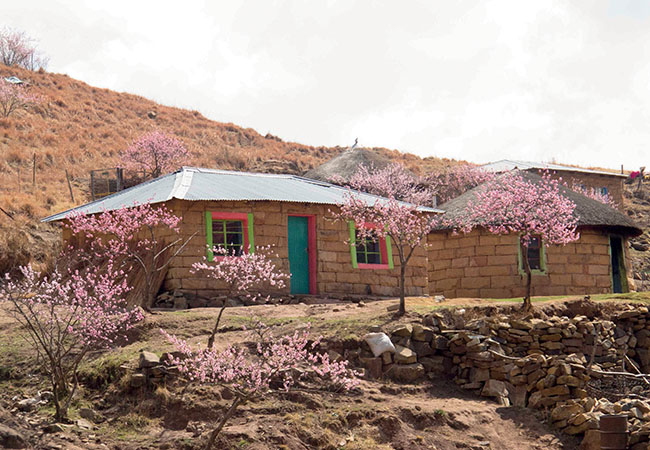