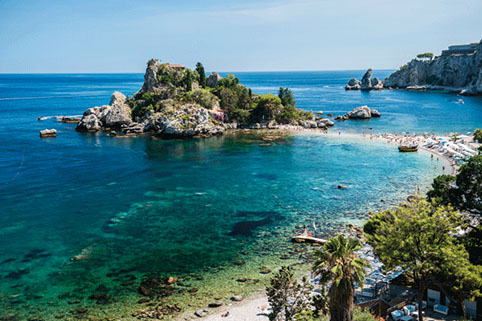 Sicily is a place of startling contrasts. From its parched interior to its busy beaches, from ancient Greek ruins to the crumbling grandeur of Palermo, from Mount Etna’s smoking cone to ornate baroque cities – this island needs time and patience to do it justice. The infrastructure can seem Third World at times, the roads patchy and the long hand of the Mafia showing itself in all manner of corruption, but Sicily rewards the dedicated traveller with plenty of riches.

My partner and I flew from London to Catania to spend a week on the island. Hiring a car, we stayed the first few days in Taormina on the east coast, then went to Cefalù in the north, where we rented a cottage on a farm. These two bases were ideally situated to explore the main high-lights of the island, which cluster around the east coast and north-west corner.

Taormina is a tourist mecca and gets mightily busy in midsummer. Sited on a bluff high above a chain of attractive beaches, it’s drawn crowds for centuries. There are terraced subtropical gardens, a magnificent Greek amphitheatre and dozens of fine restaurants strung along a main street lined with medieval buildings. Swim with the rich and famous at Isola Bella – the most photographed beach on this coast – or sip cocktails at what’s rumoured to have been Liz Taylor and Richard Burton’s favourite bar.

Sicily is the largest Mediterranean island and its strategic location has made it a sought-after prize for the many invaders who have occupied it over the millennia. Each coloniser left its mark, from Greek temples to Roman ruins, Arab mosques to Norman castles, as well as sumptuous churches and palaces much influenced by the later Spanish occupiers.

From Taormina, we went searching for evidence of that layered past. We toured the east coast, driving around the base of Etna, which puffed away like a giant chain-smoker, down to the gracious towns of Syracuse and Noto. The former has fine Greek ruins, lots of churches and an island, Ortygia, at its ancient heart.

The highlight of Syracuse is the Duomo (cathedral), which is built on the ruins of a 5th-century BCE Greek temple, its Doric columns still visible. The church’s most beautiful feature is the facade (added between 1728 and 1753 after the building was damaged in a 1693 earthquake).

That same quake also had a devastating impact on Noto, which had to be largely rebuilt. We wandered streets lined with ornate baroque masterpieces, all in yellow sandstone: balconies, sweeping staircases and curving frontages. Noto Cathedral takes pride of place in the centre of town. Recent refurbishment and the attendant UNESCO accreditation have seen the cathedral and the surrounding buildings scrubbed of centuries of grime and dirt. They’re bright and shining once again, and simply delight the eye with their over-the-top exuberance.

Next, we headed through the island’s mountainous centre to Cefalù on the north coast. This postcard-pretty port is dominated by a Norman cathedral and a steep hill, La Rocca, which rises above the town and is encircled by a fortress. Cefalù is all cobbled alleys and piazzas, sandy beaches and restaurants perched on the rocks, water lapping at their feet.

Day trips from there took us west. Palermo is the island’s grimy, dilapidated capital. Once considered the jewel of the Mediterranean, heavy bombing in the Second World War, neglect and Mafia corruption have left it a shadow of its former self. Go on a Sunday when the traffic is light and wander the streets of the historical centre.

At every turn, you see examples of its faded glory, with architectural gems that have withstood time’s ravages. Even a short walk will reveal Arab domes and arches, Byzantine mosaics, baroque stuccowork and Norman palaces. Don’t miss the Fontana Pretoria or ‘Fountain of Shame’ (lots of flagrant marble nudity) and the rich gold-mosaic interior of the Cappella Palatina. The vast ‘chapel’ is a hodgepodge of Arab and Norman styles that leave you quite dizzy with their jumbled juxtapositions.

Further west, visit Segesta, Erice and the coastal villages. Not much remains of the Greek town of Segesta other than the elegant amphitheatre. Its 5th-century BCE temple is, however, one of the finest and most complete in the Mediterranean. Set on a hillside surrounded by forests and vineyards, it’s a hauntingly beautiful spot. Nearby, Erice is one of the island’s best-preserved hill towns, with castles, marble-paved lanes and more churches per square metre than you’re likely to see anywhere else.

After each day of exploring, it was back to Cefalù. As the sun dipped into the Tyrrhenian Sea, we took our slow passeggiata (stroll) along the waterfront and Corso Ruggero, usually with a gelato in hand. Gorgeous honeyed light bathed the stonework, fishing boats bobbed in mercury water and lithe bronze bodies dived from the quay. To be quite honest, it wasn’t half bad. 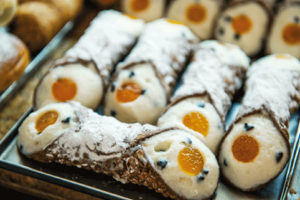 Food in Sicily is sweeter and spicier than in other parts of Italy. This ancient cuisine has influences from all around the Mediterranean. There are a few key ingredients: shellfish, swordfish and tuna; citrus; pistachios, hazelnuts and almonds; ricotta; and wild herbs.

The pastries and cakes are very sweet and the ice cream to die for. The cannoli are a favourite: pastry shells filled with ricotta and pistachios, candied fruit or chocolate. Also try the granita, a drink of crushed ice flavoured with strawberry, lemon, coffee or the like.

You’ll need a Schengen Visa if you have a South African passport. There are daily flights from most major European hubs to either Palermo or Catania.

Check out www.travelstart.co.za for good deals on flights. Hiring a car at the airport (all the major agencies are represented; we chose Avis) gives you the kind of flexibility you need on such a big and varied island.

April to early June and mid-September to October are the best times to visit, as the temperatures are not as scorching as midsummer and the historical sites are less crowded.

Sicily has a wide array of every kind of accommodation type. The best way to book is through a globally recognised accommodation website such as www.airbnb.com, www.lastminute.com or www.tripadvisor.com.

We booked three nights in Hotel La Pensione Svizzera (charming, clean, central) in Taormina (www.pensionesvizzera.com). For the next four nights, we stayed in a cottage (quiet, rural) rented through Airbnb, in the hills above Cefalù. 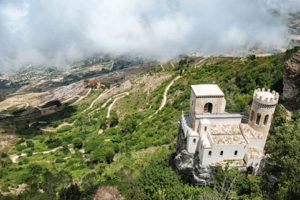 Castello Pepoli, in the hilltop village of Erice 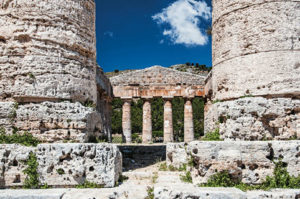 The Greek temple of Segesta 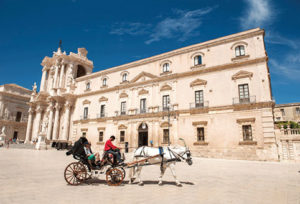 The Duomo of Syracuse