BABY ON BOARD – SEAT BELTS

BABY ON BOARD – SEAT BELTS 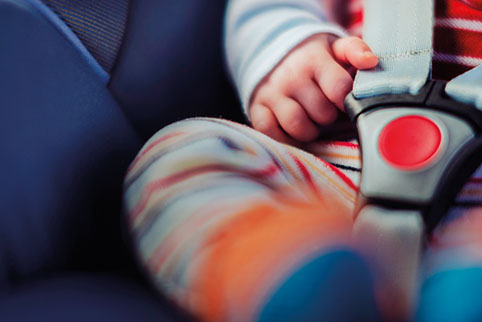 New legislation regarding the use of seat belts and car seats for children under the age of three became effective in South Africa at the beginning of May.
Mike Monk explains

When you are travelling by road, the protection of infants and children is the responsibility of the driver and every consideration should be taken to shield them from harm. The standard three-point, lap-and-diagonal seat belts are effective for teenagers and adults, but do not cater for the varying sizes, weights and relative proportions of children’s bodies. Therefore, additional equipment, namely child seats and (for older, bigger children) booster seats, is necessary to achieve full protection.

There are plenty of statistics available regarding the effectiveness of properly used child-restraint systems. Based on various international studies, Arrive Alive tells us the following: Correctly installed and utilised child seats used for children aged nought to four years can reduce the need for hospitalisation in the case of an accident by 69%. The risk of death for infants in case of an accident is reduced by 70%, and that for children aged one to four years by up to 54%.

Arrive Alive’s research reflects similar statistics in South Africa, while the SA Medical Research Council highlights the fact that road-traffic accidents are the leading cause of injury deaths among under-fives, and that most of these are children who are not buckled up.

The salient parts of the legislation are:

• ‘An infant is a person below the age of three years.’

• ‘The driver of a motor vehicle operated on a public road shall ensure that an infant travelling in such a motor vehicle is seated in an appropriate child restraint: Provided that this provision shall not apply in the case of a minibus, midibus or bus operating for reward.’

Infants and children need to travel with the protection of a child-restraint system (a child car seat or booster seat) that is appropriate to their age, size and weight, and can adapt to cope with the different stages of their development.

Car seats are specifically designed to protect infants and young children from injury during a collision or a sudden stop, by restraining their movement away from the vehicle structure. The seats distribute the forces of a crash across the strongest parts of the child’s body, with minimum damage to the soft tissues. The seats also reduce injuries that may otherwise occur during non-accident incidences, such as an emergency stop or a sudden, severe swerve, spin or jolt.

The safest place for children aged 12 years and under is in the back seat, properly restrained in a suitable, approved safety seat. Understandably, a parent may prefer to travel with an infant alongside them, in the front passenger seat. In this case, the child seat should face backwards and, if applicable, the air bag should be switched off.

Generally speaking, up to two years old, the backwards-facing seat is a must. From two to five years, a forward-facing seat can be used; thereafter a booster seat or cushion should be adopted. However, in all cases, the child’s age, size and weight must be taken into account.

At the time of writing, it was unclear what the penalties for offenders would be on a countrywide basis. However, respected road-traffic-legislation attorney Alta Swanepoel reports an admission-of-guilt fine of R250 is applicable in Pretoria and Johannesburg, as they are the only districts in the country linked to AARTO (the Administrative Adjudication of Road Traffic Offences Act). In other districts, fines will be determined following the submission of recommendations to the chief magistrates for consideration and approval. The maximum penalty allowed under the National Traffic Act is a fine of R40 000 or one year in prison.

But fines will not even be an issue if you are responsible and properly buckle up your child every time you travel. Their life is in your hands.

Special car seats can be costly, but a child’s life is priceless. Yes, the seats have to be changed as the child grows and that costs even more money. But, fortunately, schemes exist whereby seats can be donated and reused.Wheel Well collects used children’s car seats (currently only in Joburg) and makes sure they are in good repair before distributing them to less fortunate families. If you have a car seat you would like to donate or if you require one, contact Peggie Mars on 072 385 7121 or visit www.wheelwell.co.za.