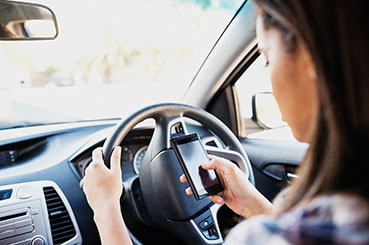 Your cellphone is an invaluable tool for communication, but it can be lethal when you pay more attention to that little screen than to the world around you.
Mike Monk explores the dangers of texting and driving

Writing, reading or sending text messages or emails, reading or searching the web: performing any of these activities on a mobile phone while operating a motor vehicle is defined as texting while driving. And doing any of them while behind the wheel is a major distraction from a task that requires a lot of concentration – particularly here in South Africa, with its generally poor driving standards. Messaging while you drive puts both yourself and other road users at extreme risk, which is why it is illegal in many countries, including here.

Section 308A of the National Road Traffic Act is pretty clear on the matter: ‘No person shall drive a vehicle on a public road while holding a cellular or mobile telephone or any other communication device in one or both hands or with any other part of the body.’

Exactly how much of a distraction texting can be has been highlighted by a number of international studies that have looked into the effects of using a mobile phone while on the move. As well as the obviously increased potential for car accidents – which can be anything up to sixfold – other life-threatening results include poor speed control and diminished response times.

Tests carried out in 2008 by the UK’s TRL (Transport Research Laboratory on behalf of the Royal Automobile Club Foundation showed that texting affected reaction time more than driving while over the legal limit for alcohol or having smoked marijuana.

A 2011 report published by the TRL for the Institute of Advanced Motorists supported this, claiming that using a smartphone for social networking while driving is, once again, more dangerous than driving while drunk or high on cannabis. The study also revealed that the complexity of the conversation in which the driver engages has a bearing on driving performance.

In 2009, the US magazine Car and Driver conducted an experiment with editor Eddie Alterman on a deserted airstrip. To start off with, his stopping distance from 113 km/h was measured when he was sober. It emerged that this distance increased by 1.2m when he was legally drunk, 11m when he was reading an email and by a very alarming 21.3m when sending a text.

Here in South Africa, statistics in the International Transport Forum’s Road Safety Annual Report 2013 show that the country experiences 28 road-death fatalities per 100 000 people per year, and the fatality rate has increased by 64% over the past 10 years. Alcohol, speeding and distracted driving (which includes the use of mobile phones) are the three most prevalent causes of road accidents in South Africa.

When attempting to see if there were any local statistics involving distracted drivers or, better still, texting-related accidents specifically, it was dispiriting to discover that none exist. ‘Oh, that’s actually a good idea’ was the comment received over the phone from someone with the Department of Transport and Public Works.

Discovery CEO Anton Ossip, whose company sees some of the consequences of these figures, says, ‘It seems hardly believable that, despite our legislation prohibiting it, two thirds of drivers still use their cellphones while driving. Many of these actually attempt to text while driving and, even though 40% of SA drivers have hands-free kits, 80% of their phone calls are made without using them.’

A spokesperson at the AA says, ‘We have seen several high-profile court cases overseas where drivers have been jailed for dangerous driving as a result of phoning or texting, and hope that this same attitude of no tolerance will be adopted in South Africa.

Our roadways are already dangerous enough and when we add in cellphone calls and text messaging, we are raising the risks to even more ridiculous levels. The Arrive Alive organisation sums up the situation perfectly: driving while dealing with text messages is definitely foolish and potentially deadly.