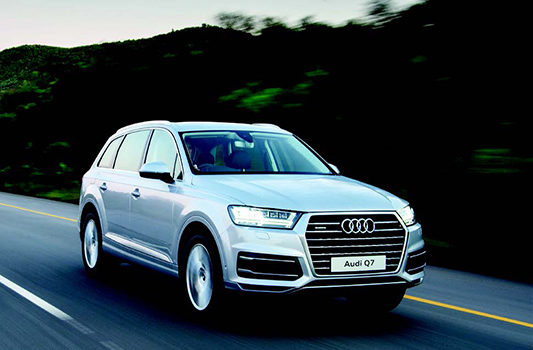 Editor Mark Samuel gets behind the wheel of two luxury SUVs

This is Audi’s flagship SUV, and that’s not only because of its galactic proportions. Luxury surrounds you, no matter which seat you settle back in. In fact, its interior dimensions are the largest in its segment, yet the vehicle is 325 kg lighter than its outgoing predecessor. It’s also more fuel efficient, and lets loose fewer harmful emissions. Interestingly, despite being bigger inside, it’s somewhat ‘slimmer’ and a tad shorter than the previous model.

It’s also not hard to see the exterior upgrades to the Q7. The rear has a new wraparound tailgate, lending a wider appearance – and, as expected, it’s controlled electronically. The tail seems slightly boxier than before, and in many ways more dominant.

The front is, well, fresher, yet still imposing, with its aggressive profile and a grille that extends from the lip of the bonnet to the bottom of the bumper.

It’s difficult to imagine how such a large car can move so swiftly; but it does. The 3.0 TDI propels it from 0–100 km/h in a touch under seven seconds; all the while, gear changes with the eight-speed tiptronic box are almost indiscernible. Top speed is noted at 225 km/h.

The infotainment system and Audi Connect present a plethora of features that cater to all your entertainment and communication needs. We’re talking a DVD drive, two card readers, navigation, two USB ports, Bluetooth interface, 8.3” screen, voice control and much more than I mention (or understand). And that’s just what the standard package offers.

Driver assistance systems are comprehensive, covering any and every scenario you can imagine, from attention assist, to parking, to pre-sense basic and pre-sense city.

The model tested was fitted with R222 800 worth of optional extras, making, as you can probably imagine, for an extremely luxurious ride.

Volvo’s new XC90 has pretty much taken the motoring world by storm, snagging awards left, right and centre, for most innovations, best car, best luxury SUV, best interior design … the list goes on and on. And climbing into this behemoth, my first impression was that none of those were undeserved.

Granted, it did take me a moment to figure out how to turn it on – every groundbreaking vehicle I drive these days seems to have a new and different way to start it … what happened to the good ol’ key? Nevertheless, the host of technologies packed into this sleek Volvo will leave your head spinning, until, that is, you figure out what they all do – then you realise how they make everything so much easier, more pleasant. In fact, it’s difficult to tear yourself out of the driver’s seat once your commute to work ends. The Sensus control system blew me away – it’s continuously monitoring the conditions around the car, including warning you of possible collision obstacles (other vehicles, pedestrians, animals, you name it), as well as ensuring that you’re staying in your lane; feedback through the steering wheel tells you when you’re drifting.

The parking sensors and cameras create a full image on the dash screen, showing you exactly how to manoeuvre your car into a parking space, or your garage.

Trim levels inside are exemplary, as can be expected from the Scandinavian manufacturer. The exterior is bold and imposing, yet also subtle at the same time. The signature ‘Thor’s hammer’ headlights lead the way – and let me tell you, another set or two of these and you could illuminate a cricket stadium.

Power and performance left me wide-mouthed – for a car of this size, the D5 diesel engine in my test model pushed me well back into the seat on take-off.

And, no matter in which of the seven seats you choose to sit, this vehicle feels extremely safe – Volvo certainly hasn’t lost its touch.