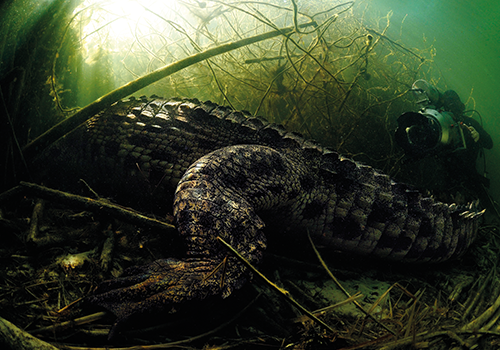 Roger Horrocks has captured images of Botwana’s delta, like few have ever seen it

Roger Horrocks is a South African wildlife photographer who specialises in shooting underwater stills and video sequences for features, documentaries and adverts.

In 2009, he teamed up with Didier Noirot (who worked as the renowned Jacques Cousteau’s cameraman for many years), SA documentary film-makers the Foster brothers and NHU Africa to shoot groundbreaking footage of diving with Nile crocodiles in the Okavango Delta in Botswana. The resulting film, Into the Dragon’s Lair, premiered on Animal Planet the following year and won Best Underwater Cinematography at the 2010 Blue Oceans Film Festival. It was also nominated for Best Cinematography at the 2011 Emmy Awards.

The sequel, Touching the Dragon, explores the extraordinary relationship between a man and an American crocodile in Costa Rica. It premiered on National Geographic Channel in July 2013 as a part of the society’s 125th anniversary celebrations. In 2013, Roger worked as principal underwater cameraman on the Dolphins: Spy in the Pod series, logging more than 100 days at sea while filming bottlenose dolphins in Mozambique and Honduras.

To view more of his extraordinary work, visit www.rogerhorrocks.com.

A unique perspective of papyrus reeds and water lilies – flora that define the aesthetic of the Okavango Delta underwater. 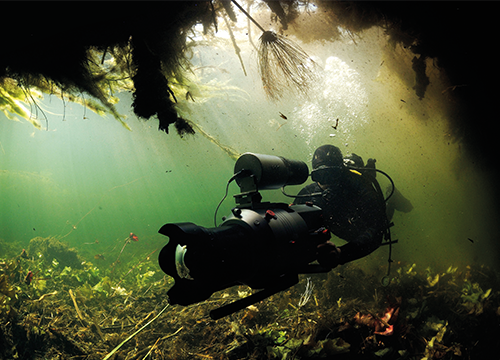 Underwater cameraman Didier Noirot cautiously enters a sub-aquatic papyrus cave in search of the lair of a large Nile crocodile. 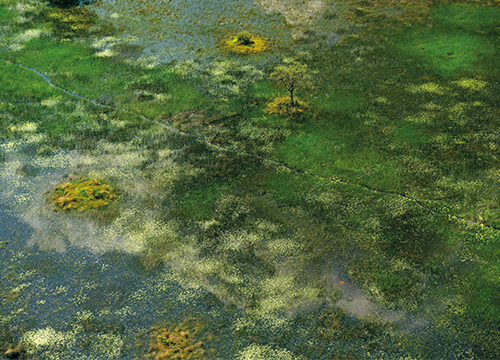 The water that transforms the Okavango Delta into a grassland oasis originates in the Angolan highlands in the summer, taking four months to reach its final destination.

A crocodile’s point of view of a young fisherman practising his art from the relative safety of a mokoro canoe.