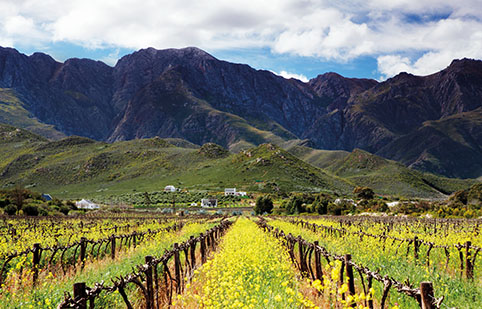 The Langeberg is the perfect region for a stay on a farm – close enough to Cape Town for easy access, but far enough to be authentic platteland. The farmers here are an enterprising bunch, offering plenty of rustic getaways with inspiring stories.
By James Bainbridge

Wilde Paarde Kloof’s white cottages, dwarfed by the muscly green slopes and rocky crevices of the Langeberg, recall the intrepid pioneers who founded this farm. A little more than 250 years ago, the Van Zyls trekked from Cape Town and settled among the fynbos and aloes in this wild mountain valley. The current farmer, Albertus, is the ninth generation of Van Zyl here.

The name ‘Farmer Redbeard’, a recent invention to promote the farmstay, is a reference to Albertus’s bushy rooi baard, although he credits his forebears with the idea: ‘The brand was established 300 years ago’. Indeed, with so much family history, he often loses track of how many ‘greats’ to assign a distant grandfather – or the unfortunate uncle killed by a leopard.

Activities at Farmer Redbeard are all about hands-on farming, including beekeeping, winemaking and turning fruit from the orchards into preserves. For a mellow experience with a view, hop on to Albertus’s tractor-trailer for a bush braai or to taste the Chardonnay and Cabernet Sauvignon from the farm’s vineyards.

The two cosy self-catering cottages feature all the important elements for a relaxing weekend away (a corkscrew, a Roald Dahl treasury), and the bush camp has a refurbished bus that sleeps four. Die Ou Huis is a historical option dating back to the farm’s early days, with a Cape Dutch layout, thick walls, reed ceilings, free-standing bath and Ouma’s biscuit tins on the dresser.

From when you first arrive, Kogman & Keisie’s driveway sets the tone of this organic farm: you pass a windmill, solar panels, a natural swimming pool with a water-plant bio-filter, and a tortoise-crossing road sign. On the brow of the hill stand the farmhouse – newly opened as a five-room guest house with Victorian baths and hobbitesque turrets – and two self-catering cottages. If possible, angle for the Mountain View Cottage with its window above the bath for superb watery stargazing.

The views from up here are incredible: in one direction are the wrinkly cliffs of Kogmanskloof, with its hiking trails and climbing routes; in the other, Montagu’s rooftops. ‘Our back gate leads into the nature reserve. We’re a working organic farm, and town is a short stroll away – it’s everything you want from rural life,’ says owner Petrus Jansen.

Petrus, along with his wife Liana, won a sustainability gong at this year’s Cape Winelands District Municipality Mayoral Tourism Awards. But it has been a long road: having studied business management and psychology (surprisingly useful on a farm, apparently), Pretoria boy Petrus bought his three hectares of paradise and ‘roughed it like a mountain man’. He worked the land all alone for five years before persuading Liana, a landscape architect and anthropologist, to join him.

The farm is certainly a fascinating place to tour with Petrus. From the farmhouse, a path winds down along the riverbank, past a swimming pool, braai terrace and hens’ retirement home; to a vineyard and orchard, groves of olive and pomegranate shrubs, and nurseries of indigenous and heirloom plants.

When you check into a farmstay on Route 62, you definitely don’t expect the bearded boer opening up the gate for you to have a Birmingham accent. But the elongated vowels of the English Midlands are what you get here at Glen Eden – along with a veritable tsunami of enthusiasm for farming life.

Andy Cooper and Claudette Bricknell – a larger-than-life couple who have a penchant for free-climbing – quit their sales and marketing jobs to travel the world. Having been everywhere from Machu Picchu to the Cederberg, they eventually decided that the Montagu area was unbeatable.

Mastering animal husbandry on a 48 ha chunk of the Klein Karoo may seem a bit of a stretch; but, under the tutelage of a neighbouring farmer, the intrepid Brits are learning fast. At the time of writing, Andy and Claudette’s  livestock included 95 chickens, 85 sheep and six pigs (most of them seemingly pregnant, perhaps inspired by the recent arrival of human baby Jack). The hens here produce more than 500 eggs per week, and Andy holds forth about subjects such as dosing sheep for nasal worm.

The couple has renovated two cottages, with a third following soon, and have plans to include shabby-chic caravans too. The cottages feature fitted kitchens, Claudette’s jazzed-up vintage and second-hand furniture, and even splash pools for gazing at the fynbos-clad surroundings.

Walking trails lead over the river, and the kids will enjoy feeding and petting the lambs and collecting eggs.

Vredendal Farm covers 60 ha at the foot of Burgers Pass, which climbs more than 300m between the Keisie and Koo valleys. The area is bristling with fruit growers and Vredendal is no exception, being one of the Western Cape’s largest exclusive producers of gooseberries. With a pack store on-site, fruit from this farm will end up on shelves at Woolworths, as well as in various yoghurts and jams produced in Cape Town.

Guests staying in the three cottages can join the agricultural fun, picking vegetables from the kitchen garden. They can also wander the fields and cross on to neighbouring farms, or bundu-bash up to rock pools in the Langeberg. Klipspringers, caracals and large tortoises have been spotted here, steenboks chow the roses, grysboks and dassies plunder the gooseberries and a leopard tries to catch a neighbour’s goats.

With a rose-garden-surrounded pool and a picnic spot by the stream, the farm is an excellent place to just relax. The lack of cellphone reception helps, as do the cosy cottages’ stoeps, braais and indoor fireplaces.

This family farm offers a novel way to see the Langeberg: from the back of a tractor. For some 30 years, its specially adapted tractor and trailer (both fitted with awnings and seats) have chugged up to 1 500m for views of the Koo and Robertson valleys. The landscape below is stunning in every season – highlights include the spring blossoms, apple and pear orchards in autumnal colours, and flowering proteas in the winter snow. Another highlight is the hearty potjiekos offered for lunch.

The farm also has mountain-biking, hiking, 4WD trails and a lake for hardy swimmers. There are four cottages on the mountainside: an old farmstead and a rustic stone cottage, which overlook the valleys, as well two timber cottages on the dam that look fit for grizzled American pioneers. Campers can pitch in a poplar grove in a sheltered kloof, where a waterfall gushes into a pool. The campsite also has a semi-open bedroom for a tent-free outdoor experience. 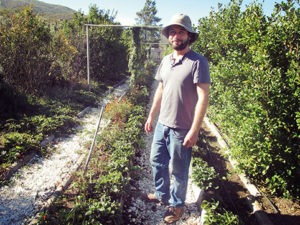 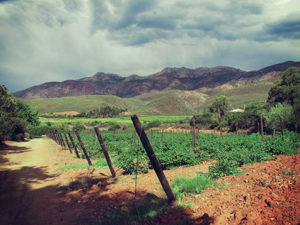 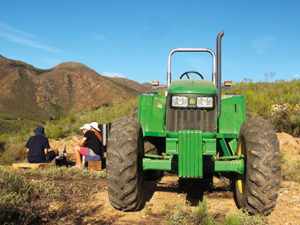