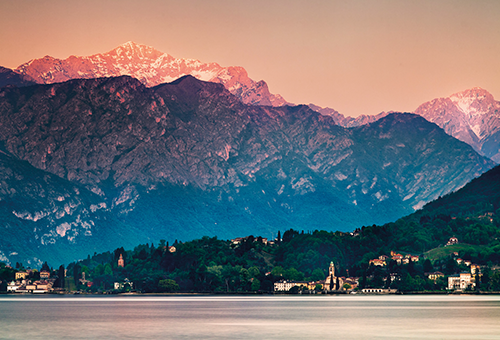 Surrounded by glorious views and glamorous people, Richard Webb manages to experience Italy’s famous Como without breaking the bank, and without the crowds

The sun was warming my back and the air was buzzing with birdsong. The morning newspapers were all reporting on protests against military rule in Thailand, but from where I was standing, this seemed to be happening on another planet. In front of me, the lake was chocolate-box perfect, with the muted sounds of boats and the buzz of an occasional seaplane. Lake Como was already delivering on every account.

Back home in Cape Town 24 hours earlier, my well-versed packing routine had taken two stubble-scratching hours instead of the usual 30 minutes. Lago di Como (as it’s known locally) is old money, I had reasoned, and while I’d planned for an affordable trip, I also needed to be prepared to mingle with the upper crust.

This deep, Y-shaped glacial lake, which is surrounded by soaring mountains and stretches all the way from the Alps to the Adda (a tributary of the more famous River Po), is an hour and a half’s drive from Milan. Most of the trip is through unremarkable landscapes – something that changes once the hills begin.

Lake Como lies carved into the slopes, wedged between the provinces of Como and Lecco in Lombardy. It’s fringed by forests and towering peaks, encircled by miles of stone footpaths built by colonising Romans and later trodden by generations of peasants, traders and tourists. These trails, winding high up above the lake, are still well marked today. Energetic visitors can enjoy a selection of magnificent walks lasting anywhere from a couple of hours to several days.

Each path revealed to me a different side of the region – from the mountains above Bellagio to old smugglers’ routes, from quiet, sun-dappled oak forests to awe-inspiring vistas of neighbouring Switzerland. For anyone with a love of nature and a free spirit, being on foot is a wonderful way to experience the abundant charms of the lake.

I found myself there in May, in the calm before the tourist storm. As the summer heat begins to settle, car parks, campsites, beaches and hotels fill with thousands of holidaymakers on their annual pilgrimage. I, of course, blame William Wordsworth and a passage from his epic 1799 Prelude.

‘And, Como! thou, a treasure whom the earth / Keeps to herself, confined as in a depth / Of Abyssinian privacy.’

Well, William, it’s no longer private. So much so, I’d warn against visiting after May.

To wander lonely as a cloud, to stand silently and stare, getting lost occasionally among the butterflies, olive groves and wild flowers, is half the fun. But I still longed for la dolce vita: sharp suits, dark Ray-Bans, strong espresso and the most impossibly cool wheels ever to have turned…

My hired Vespa was a shade of pale pea-green and almost as old as me. It boasted two seats and, on either side, a visibly well-used chrome crash bar to buttress its voluptuous Lollobrigida curves. I spent two days wending my way along roads lined with sunflowers and cypress trees, en route to medieval hilltop towns; the ‘reng-deng-deng’ of the two-stroke engine echoing off the stone walls like a buzzing wasp.

I’m sure that a smug look creased my face as I parked on Como town’s main square, peering at the cars full of tourists stuck in traffic jams.

The Vespa was also ideal for heading out to enjoy a picnic lunch of sun-dried tomatoes, burrata cheese, culatello ham and ciabatta somewhere in the suitably picturesque countryside. Gregory Peck in Roman Holiday I was not, but I did feel rather debonair zipping up tiny washing-strung lanes to quaint cafes overlooking the lake.

Taking a seaplane flight – a slightly more rarefied form of transport – over the lake is another of my most cherished memories of the trip. It afforded me a bird’s eye view of the lakeside towns and villages and, of course, of the spectacular villas owned by the likes of Madonna and George Clooney.

But there is also much to see and do on foot in the charming architectural mishmash that is Como’s historical centre. As evening falls and the sun shrinks from Piazza San Fedele, the evening ritual of the passeggiata gets under way – a leisurely stroll through the main streets of the old town, with the prospect of savouring a glass of wine and putting the world to rights with friends and neighbours.

Lake Como is most definitely no longer what Wordsworth described as the ‘treasure whom the earth keeps to herself’, but it is certainly still a treasure.

• Bellagio is a busy but pretty tourist town and a hub for the boat service on the lake.

• Cernobbio is home of the fabulous, but rather expensive, Villa d’Este hotel (www.villadeste.com). Treat yourself to breakfast at the most iconic and effortlessly sophisticated spot on the shores of the lake.

• Como, at the southern end of the lake, is the main town and a super base from which to tour the rest of the area. Stop by the market at the medieval walls on Saturdays.

• Griante is a village on the western shore of Lake Como. It’s known for its spectacular villas and for the views of the lake from the Santuario della Madonna delle Grazie di San Martino, a small church perched high up on the mountainside.

• Menaggio is the main town on the western shoreline. Here, you can wander the pedestrianised areas awash with coffee shops, gelaterias and restaurants.

• Tremezzo is known for its grand villas. Villa Carlotta in particular, with its waterfront botanical garden, is very elegant.

• Varenna, located on the eastern shore across from Menaggio, is over-looked by the remains of Castello di Vezio. Take a stroll through the gardens of the Villa Cipressi and the Villa Monastero.

For more information about Lake Como, visit the official tourism site at www.lakecomo.it/en.

If you travel on a South African passport, you’ll need a Schengen visa, which you’ll have to apply for in person in Cape Town, Durban, Johannesburg or Pretoria. You can read all of the requirements online.

There are three international airports in the Milan area, plus one even closer to Lake Como, just across the border in Lugano, Switzerland. The most convenient option will depend on where you’re flying in from. The lake area can be reached in an hour or so from any of these airports.

You can also get to the lake directly by road or rail. Cross in from Switzerland via the Splügen Pass or St Moritz for a scenic route. Regular trains run from Milan to Como and there are overnight sleeper trains from several European cities.

Once at the lake, you can use the buses that run along its western shore from Como to Menaggio. Ferries operate from Como in the south to Colico in the north, stopping at most towns en route. Or, if you are feeling adventurous, you can rent a motorboat with no need for a special licence.

Avoid the worst of the narrow, twisting roads if you are not a confident driver, and make things easier for yourself by choosing a small car. Alternately, hire a bicycle or join thousands of others and rent a scooter.

Villa Gallietta is in the town of Como, in the south-western corner of the lake, centrally located for all the places you’ll want to visit. Stay in the luxurious lakeside villa or one of the apartments.

Casa del Portico is a quaint family-run B&B in a house built in 1690 in Bonzanigo di Mezzegra, a little up the lake from Como.

Menaggio Youth Hostel makes an ideal base for cycling tours into the Alps, sailing lessons or rock-climbing excursions; or join the Italian-language or -cooking classes. Also located on the western shore, about halfway up the lake, it’s a more affordable option.

Plan to visit between March and November (late spring is best for wild flowers). Beware: it gets hot and busy during the summer.

Consider visiting the lake region as a day trip instead of spending the night there, in order to avoid the high prices of local hotels. If you stay in Milan, you can make several outings to explore various towns and villages along different parts of the lake.

Plan carefully: Bellagio in January will cost far less than Bellagio in August, and staying in a lesser known town in the off season will save even more. Picking a hotel that’s just a short walk from the lake, rather than right on it, will also cut costs. Then consider spoiling yourself with a flight over the lake. 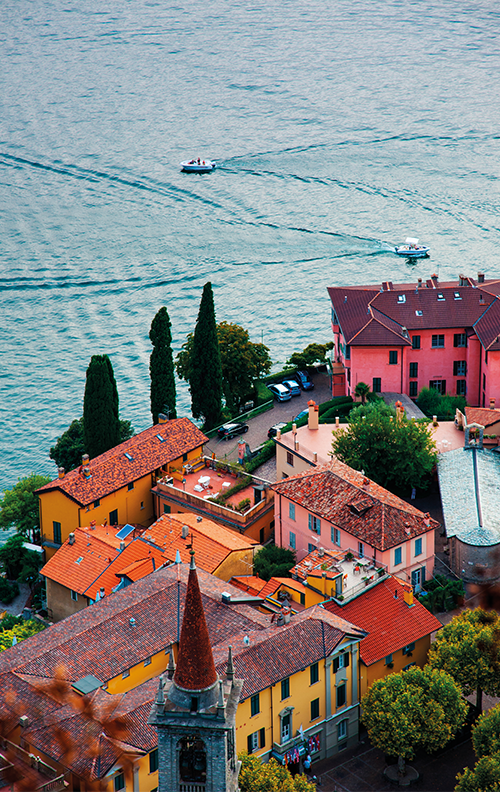 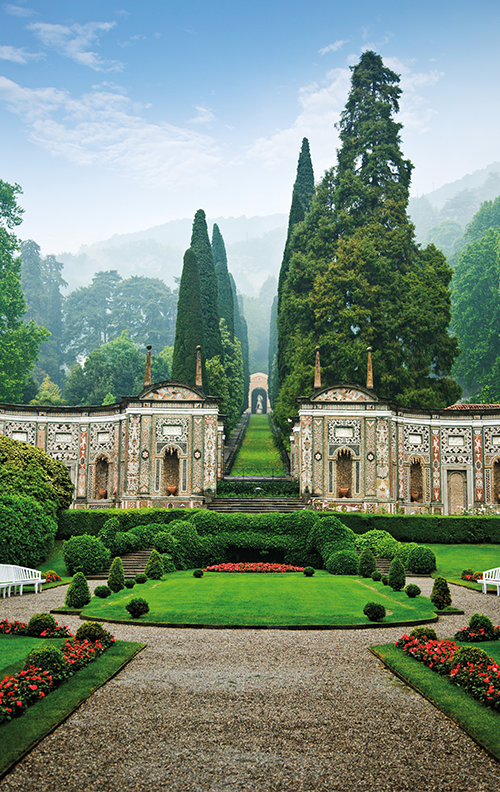 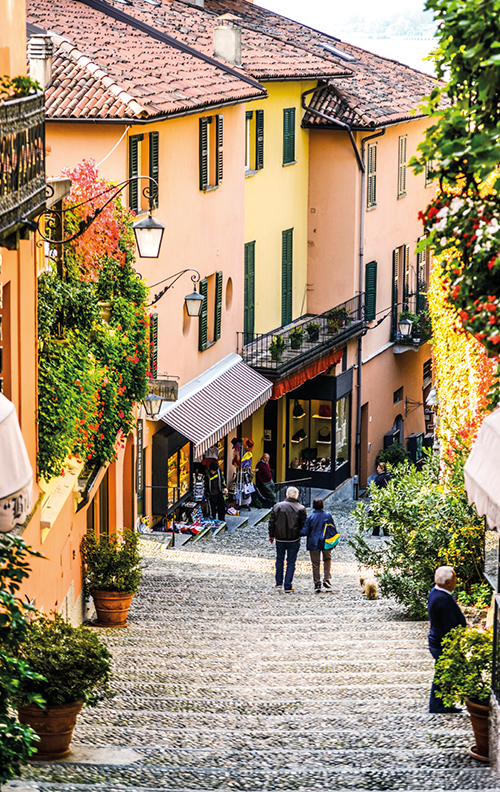