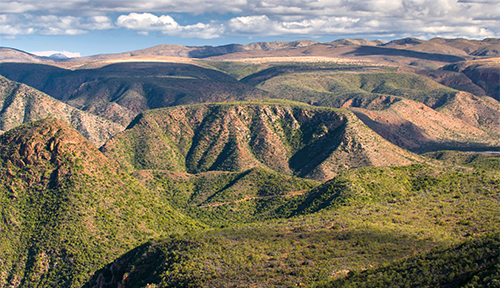 With narrow canyons to explore by day and welcoming farms to rest your head at night, it’s well worth discovering the Baviaanskloof. By Marion Whitehead

The dim waters of the mountain pool were more than brisk: I shrieked with shock as I plunged in. The dark stream had most likely never seen the sun as it seeped its way out of the bowels of the earth and collected in a slot canyon incised in the side of the Baviaanskloof valley. The towering cliffs that almost met overhead were fringed with ferns and rock-strangling fig trees, ensuring not even a glint of a sunbeam crept in to warm the small pool.

Being inside a slot canyon feels a bit like standing in a great natural cathedral, with a certain primeval quality about it that makes time totally irrelevant. The deep silence is interrupted only by the peaceful sound of clear water trickling between rocks.

The water was too bitingly cold to stay in the pool for long and, as I waded to the edge, a movement caught my eye: a little brown water snake was swimming ahead of me. It wriggled to a safe hiding place and I promptly wriggled out the opposite side, wondering if I’d stumbled upon the nursery of the mythical water snake – a monster said to lie in wait for beautiful maidens to lure beneath the surface. In this timeless place, anything seemed possible.

The remarkable Baviaanskloof valley (about 100 km north-west of PE, between Patensie and Willowmore) is the result of an ancient fault line in the Earth’s crust, running from east to west between the Baviaans and Kouga mountains. Here, the land cracked open during the great upheaval millions of years ago when the supercontinent of Gondwanaland split apart in the biggest divorce of all time. South America and Australia went their separate ways, leaving Africa to get on with giving birth to humankind.

In this remote spot, tall forests tower on the banks of clear rivers, subtropical thickets burgeon in fertile pockets, fynbos flowers on mountain tops and succulents thrive on stony slopes. It is the Karoo like you never imagined it.

At the wilder eastern section of the valley is Baviaaanskloof Nature Reserve, the country’s third-largest protected area, after the Kruger and Kgalagadi parks. Since 2002, when the Baviaanskloof Mega Reserve initiative was launched in order to encourage local stakeholders to become conservancy partners, farmers in the valley’s heartland have embraced the opportunities afforded by tourism.

Now, just about every other farm at the Willowmore end of the valley welcomes guests to share this outdoor paradise, with activities such as hiking, birdwatching, mountain biking and 4×4ing. Accommodation ranges from luxury lodges to bush camps and even caves with creature comforts.

The kloof is a rugged wilderness, full of red cliffs honeycombed with caves and strange rock formations that play tricks on the mind. Where the valley’s sides have cracked open to form slot canyons, there are doorways to another world.

The canyon at Bokloof farm, where we swam, is an easy 20-minute walk from the farmhouse. The two friendly canine guides insist on a quick stop at the pool, waiting until you strip off and plunge in.

Zandvlakte farm, on the western edge of the reserve, made a convenient base for our explorations. Here, we needed no encouragement from hosts Pieter and Magriet Kruger to explore the deep slot canyon a half hour’s hike from the house.

You need a 4×4 for the Baviaanskloof Nature Reserve, as there are numerous drifts and causeways to cross. Depending on the rainfall, they can be bone dry or full to overflowing, adding to the sense of adventure. From the top of Grasnek Pass, we were almost on a level with the surrounding mountain peaks. There was no sign of human habitation anywhere in this magnificent wilderness.

We were amazed at the number of normally shy kudus and bushbuck we spotted all over. Bad-boy buffaloes eyed us, grumpy at our intrusion into their green world, and we had to pause a few times for leopard tortoises lumbering across the road.

Our last stop was at Cedar Guesthouse on Matjiesfontein Farm, set deep in the Kouga Mountains. We were delighted to hear their canyon had a waterfall at the end of it, and followed a path that disappeared every so often in a jumble of rocks tossed about in the last flood like mere marbles.

Boulder hopping, carefree, amid this natural beauty, I felt like a real child of Africa, poking into past family schisms, and wondered to myself which member had started the ruckus that eventually left Mother Africa and siblings Australia and South America in distant corners of the planet. Was there a family secret waiting to be uncovered?

The kloof made a sudden 90° bend and there – between the towering rocky walls of a massive slot canyon – was a long, dark, brooding pool. Over at the far end, the narrow gap was plugged by a casually placed boulder the size of a two-ton truck. I stripped off and waded gingerly into the icy mountain water. Thoughts of that legendary water snake sprang up unbidden. How big was this pool’s guardian?

Was something biting at my ankles? Peering into the clear water, I could see nothing. But my legs ached with the cold and, as I hotfooted it to the bank, I am sure the great snake laughed at me from his hiding place, safe in Baviaanskloof’s primeval nooks and crannies.

Baviaanskloof Nature Reserve achieved World Heritage Site status in 2004 when it was inscribed as one of the Cape Floral Kingdom’s eight serial protected areas, due to its outstanding natural beauty and rich biodiversity. The 2 300 km² reserve contains seven biomes, which are home to more than 300 bird species (making it a globally important area for bird life) and around 60 mammal species, including buffalo and rare Cape mountain zebra. Researchers have collared 19 leopards with GPS devices, making the area home to one of the largest leopard studies in the world.

Pay a visit to the rustic Vero’s Restaurant down in the valley, across the road from the Baviaans community craft shop, for good old-fashioned moerkoffie and freshly baked roosterkoek.

Baviaanskloof Nature Reserve has two back-to-basics riverside bush camps, a conventional campsite at Komdomo near Patensie, and a converted farmhouse to choose from.

Bokloof Guest Farm offers a choice of B&B accommodation, a wooden cottage or a campsite.

Cedar Tourism’s renovated farmhouse is powered by solar and gas, as are two romantic cottages.

Zandvlakte guest farm has a choice of suites and self-catering cottages, with hearty home-cooked meals available.

Phone ahead to check road conditions, as sections can become impassable after heavy rain. There is no cellphone reception in the Baviaanskloof and no ATMs or petrol, so draw cash, fill up and plan your route. 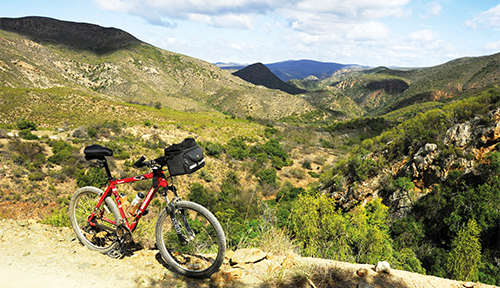 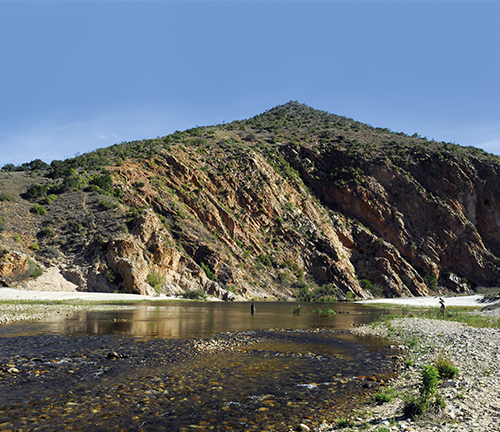 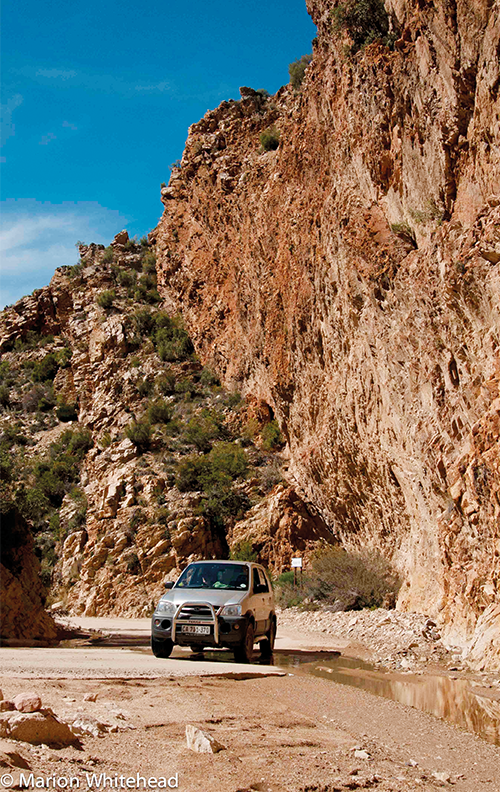 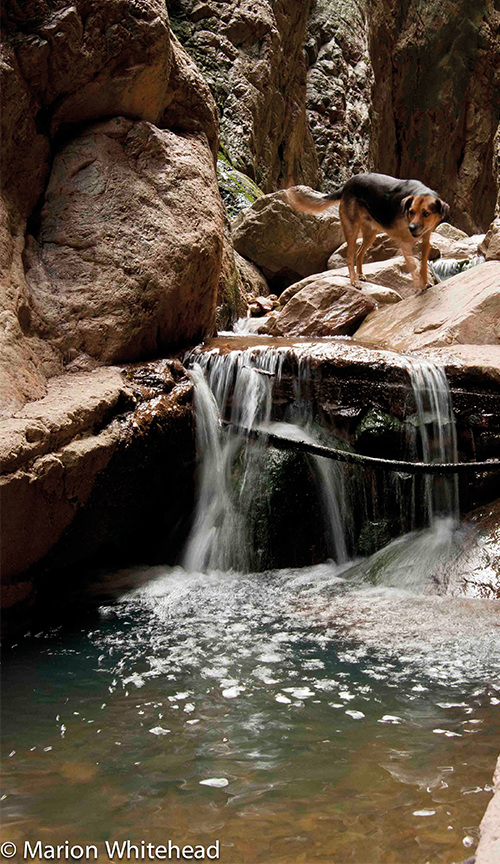