Land of the gods – Greece

Land of the gods – Greece 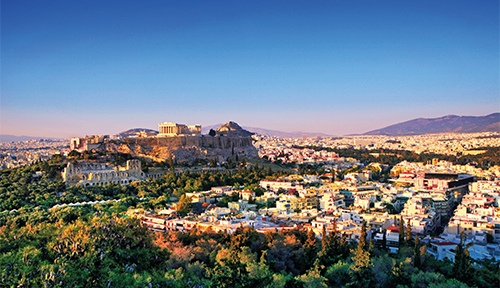 It will take you less than a day – a few hours, perhaps – to travel from an ancient citadel, past the birthplace of a god, across the river that divides the world of the living from the dead, and on to the centre of the Earth. It’s a surprisingly easy journey too: no time machine is necessary, no black cloaks, swirling orbs or mythical creatures. All you need is a car, a tank of petrol and a good map.

If you’re the navigator, this is what you need to know: The starting point is the Acropolis in Athens. From there, head north-west towards Thebes, then turn west towards Livadia. Here, you can take a break beside the river Styx, before continuing on towards Delphi. You could do the trip in just a few hours, but you may want to slow it down and take a different route back. After an overnight stop, add breakfast in a seaside village, lunch at a ski resort and then an early-evening feast of traditional Greek fare followed by a sauna. Tempted to come along for the ride?

We took off on this road trip in early autumn; so close to winter, in fact, that Athens was quite empty of holidaying crowds and the peaks of the Peloponnese peninsula were covered in snow. Being there in the low season meant we had all of the capital’s historic sites almost to ourselves and were able to take our time absorbing the significance of the place.

Take just a moment to contemplate the fact that many of the city’s edifices – among them, the ancient citadel of the Acropolis perched on its rocky outcrop – were already tourist attractions for curious Roman travellers. Imagining what the streets around you would have looked like 2 500 years ago adds so much more depth to a visit to this bustling modern city.

Delphi, considered by the ancient Greeks to be the centre of the world, is an easy 150 km drive from Athens. The road leading out from Syntagma Square (on the fringe of the city’s oldest areas, where most of the historic sites are situated) quickly thins of traffic. Within 20 minutes, you have left the city limits and are winding your way past little kantinas – do stop off when you need a strong coffee or a souvlaki grilled on an open fire – and on into dry olive country.

The confusing thing about driving in Greece is that the road signs are, well, written in Greek. Most of them have been translated into English, but the spelling of place names tends to vary. One moment you’re following a sign to ‘Thebes’, the next to ‘Thiva’ – both are the same place.

Thebes was considered to be the birthplace of the hero-god Heracles, but it’s not really worth a visit these days so bypass it and head on towards the pretty town of Livadia, where the river Styx cascades in a seemingly endless series of waterfalls and stone bridges loop gently between moss-covered trees. It’s a beautifully serene place – the river once thought to mark the boundary between our living world and Hades – and now a favourite place for locals to take quiet walks, enjoy lazy lunches and gather with friends.

It’s a 50 km drive to Delphi from this underworld gateway. According to the ancient Greeks, the mighty god Zeus wanted to know where the centre of the Earth was, so he set two eagles flying: one from the eastern edge and the other from the western edge. Their paths crossed above the western slope of Mount Parnassus. And so it was there, Zeus deduced, that the naval of Gaia, Grandmother Earth, was situated.

While the hotels and restaurants boast exquisite views out across the Corinthian Gulf, it’s not the modern town of Delphi that attracts visitors – it’s the museum and hillside of ancient ruins. You’ll need to spend a good few hours here, so it’s worth staying a night to avoid the need to rush back to Athens. The museum is awe-inspiring and the archaeological site – including a stadium that could hold 6 500 people, a 5 000-seater theatre, the marble building blocks of columns once a part of the Temple of Apollo, a treasury and a gymnasium – is truly mind-boggling.

The road that zigzags down the slopes of Mount Parnassus and through Delphi is a dramatic series of hairpin bends that at one point actually loops back on itself. If you are not in a hurry to return to Athens, take this long route home.

Follow it down the mountain to sea level, where plantations of enormous olive trees – likely far more than 500 years old – flank the tarmac, and carry on to the pretty little seaside village of Galaxidi, just 40 minutes’ drive from Delphi. From there, head up along the coast of the Corinthian Gulf, across the striking toll bridge between Antirrio and Rio (bringing you to the Peloponnese peninsula) and from there inland to mountaintop Kalavryta.

The route to this village is nothing less than spectacular: think Outeniqua Pass on steroids. It is a tar road easily enough driven in a small car, but if you would rather avoid navigating dramatic, sharply winding bends, then leave your vehicle at the village of Diakofto and take the train.

The Odontotos (literally translated as ‘tooth railway’) is a 100-odd-year-old cog-railway line linking Diakofto with Kalavryta – an hour-long 22 km journey that climbs 750m from sea level up the Vouraikos Canyon.

The mountain village of Kalavryta, a fantastic winter base for skiers and snowboarders, has a sombre modern history. During the Second World War, towards the end of 1943, around 80 German soldiers were captured near the town. When the Greek resistance executed the prisoners in response to German atrocities, the Nazis countered by killing every man and boy over the age of 14 – massacring almost 700 of Kalavryta’s residents and burning the town to the ground. Only 13 males, it is said, survived. There is now a holocaust museum in the centre of Kalavryta and a memorial on top of Kapi hill, where the killings took place. Granted, a visit to the memorial doesn’t exactly make for a light-hearted holiday outing, but the massacre is an integral part of this seemingly innocent spot’s past.

The journey from Kalavryta back to Athens can be done in under three hours. If you leave in the early afternoon, it’s an easy-going drive along a coastal freeway that’ll have you back in time to watch the sun set and the lights come on across the city.

The best place for a sundowner? One of the many bars and cafes found in Monastiraki. This neighbourhood is built on and around the Ancient Agora, once the gathering site of Athens and the centre of its spiritual, economic and social life. If you’re looking for a truly magnificent spot to celebrate the end of a journey to the centre of the Earth and back, this place – which has views across the still-impressive Temple of Hephaestus and up to the Acropolis – is hard to beat.

Arachova, just 12 km up the hill from Delphi, is a popular ski resort. You can hire skiing or snowboarding equipment for the day or simply wander through the steep streets of what feels like an Alpine village.

While Greece is well known for its glorious summers (temperatures in Athens can reach the 40s), it’s actually a year-round destination with a number of ski resorts. During summer, expect to be one of thousands of tourists who flock to the historical sites; if you visit in winter, you’ll have them almost to yourself.

You’ll need an international driver’s licence if you’re going to hire a car. And remember: in Greece you’ll be driving on the opposite side of the road to South Africa.

If you travel on a South African passport, you’ll require a Schengen visa for Greece. This costs 60 (plus R280 service fee) and should be applied for at least three weeks before departure. Applications need to be made in person in Cape Town, Pretoria or Durban.

There are no direct flights from South Africa to Athens, so be prepared for a journey of at least 15 hours, including one stop. Greece’s largest carrier, Aegean Airlines, has signed a code-sharing agreement with Qatar’s Etihad Airways. It now offers flights between Joburg and Athens, with a stop in Abu Dhabi, from around R10 000 return. Turkish Airlines too offers affordable flights.

New Hotel is a hip, designer establishment very close to Syntagma Square, a popular meeting point in Athens. It is on the edge of the historic neighbourhood of Plaka and makes an interesting, artsy base for those keen to spend a few days soaking up the atmosphere around these parts.

The prestigious King George hotel set on Syntagma Square is an elegant city retreat. Be sure to take your camera to breakfast: the view of the Acropolis from the dining room is outstanding.

Quirky Alice Inn Athens in Plaka is a funky townhouse. It has four ‘micro-apartments’, two of which have kitchenettes. Pay a little more and ask for the Harry Belafonte Suite – you’ll get your own rooftop terrace with a view of the Acropolis.

A small establishment on the main street of Delphi, Iniohos Hotel Restaurant is a stone’s throw away from the cafes and curio stores. The rooms are simple yet comfortable; ask for one with a view.

Filoxenia Hotel and Spa offers a wonderful respite for travel- and ski-weary guests with
a hammam, sauna and jacuzzi to relax in. It’s in the centre of the town, close to all of
the restaurants and shops, and the cog railway station.

As a rough guide, the approximate distances and driving times are as follows: 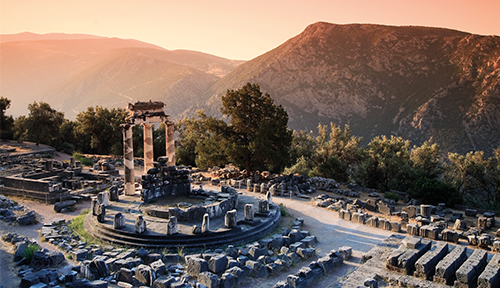 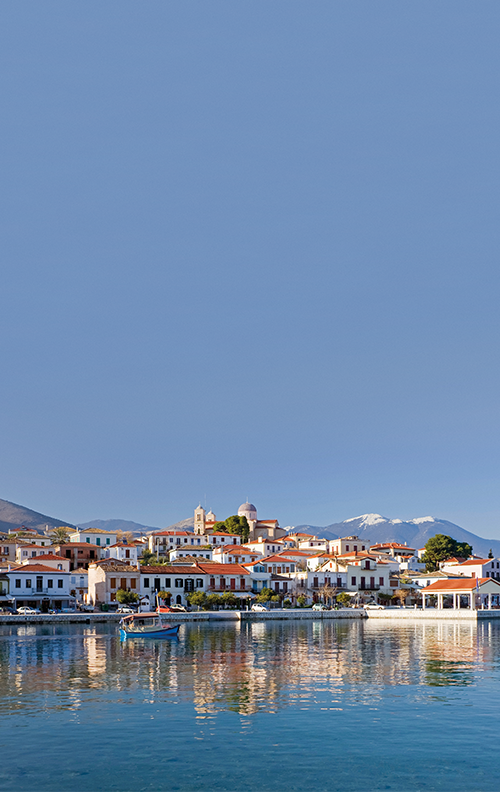 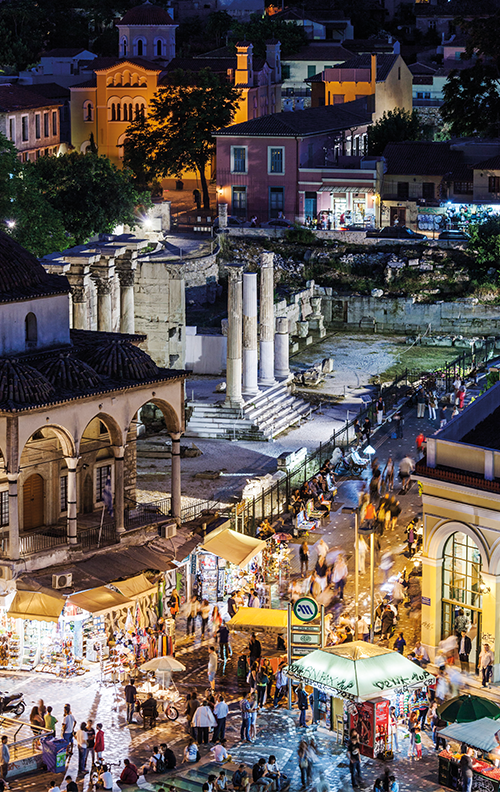