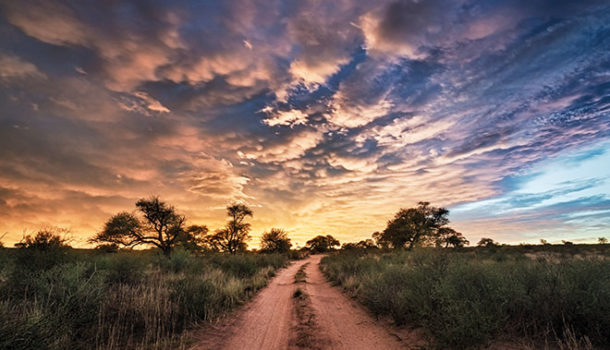 On a wilderness trail in the Kgalagadi Transfrontier Park, an unexpected guest leaves Heather Ingarfield wondering what else is out there

We didn’t notice the paw prints circling our tents.

We were all too busy making out the dusky profile of a brown hyena, loping purposely towards the waterhole for a morning drink, a nightcap after hours of scavenging across the dry plains.

He flicked his ears. It was just birdsong floating over the dunes, gently probing the silence. Kalahari mornings are quiet, the rising sun sending most animals into the shadows of trees and burrows, where they will spend the day sleeping off the hangover of a night of hunting, roaming and fighting. That’s where the hyena was heading, sufficiently rehydrated, trotting off into the distance, racing as the light rapidly canvassed the brick-red earth.

It was a rare moment. You don’t often see the endangered, elusive and uglier cousin of the frequently sighted spotted hyena (‘Harry’, as they’ve affectionately been named after years of family holidays in the Kalahari). So rare, we’d all leapt out of our tents at the urgent whispers of our guide, stepping right over the prints.

We were in the Kgalagadi Transfrontier Park, far from the rest camps and off the tourist roads, surrounded by nothing but crimson dunes. No reception, no fences, no ablution blocks. It was our second day on one of the SANParks 4×4 Eco Trails, a three-night ranger-led journey into the depths of the bush, over slippery dunes and dry riverbeds, through previously unexplored corners of the 37 256 km² park, 73% of which lies in Botswana. 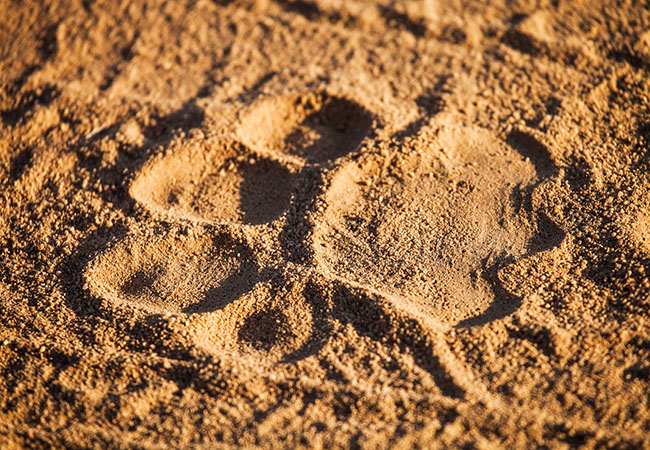 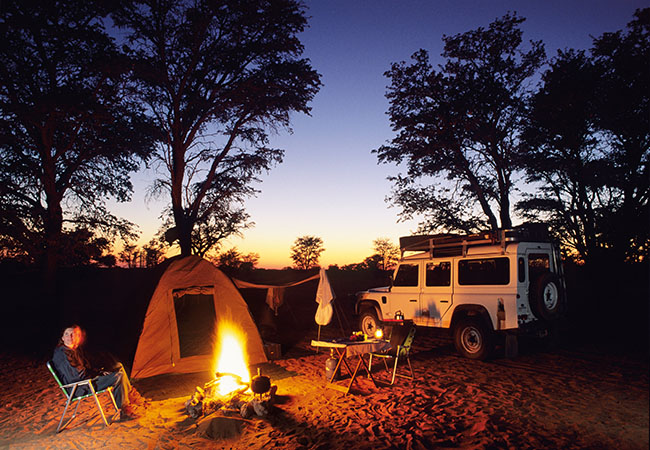 In 2000, the parks merged to form Southern Africa’s first transfrontier park, covering nearly one-third of the Greater Kalahari region, the largest sandveld area in the world, extending through South Africa, Botswana and Namibia.

Contrary to popular belief, it’s not a desert. While it may be dry enough, the dense ground cover and vegetation knock it out of the desert category. And dry it certainly is – the two main rivers, Auob and Nossob, last flowed in 1974 and 1964, respectively! It sure does put the origin of its name (derived from the Tswana word Kgala, ‘the great thirst’) into context. Yet the area manages to sustain some of Southern Africa’s largest populations of predators (such as hyena, wild dog, lion, leopard and cheetah) existing within the same environment.

Three days before, we’d had three young, meddlesome cheetahs sniffing our dusty Land Cruiser tyres. We’d barely left the iron gates of Twee Rivieren, the largest rest camp, administrative centre and entrance to the South African side of the park, before driving up to a cluster of stationary cars. Tea and rusks flung to the back, we hauled out binoculars, expecting to spend 30 minutes looking at a tree stump masquerading as a lion’s head. That is, until we saw a cheetah family lolling on the gravel embankment. After many basin-side, ablution-block chats, we discovered that even though Twee Rivieren was the busiest out of the three main camps on the South African side, it had a reputation as being the cat camp.

I stood, watching the brown hyena melt into the horizon, enjoying the stillness in the air and the expanse of the landscape, before retreating to our tent. That’s when I saw the prints.

Deeply imprinted in the rouge sand, the side-plate-sized print had four lobes, with one larger back, petal-shaped lobe.

‘Lion,’ our guide confirmed, far too nonchalantly for my liking. Then again, he had slept on the back of his ranger vehicle (‘I like sleeping under the stars,’ he’d mentioned, ‘but I can’t sleep on the ground … the scorpions, you know?’).

The irregular shape of the back lobe and the lack of claw marks meant our night visitor was definitely a cat, and the size, well, it could only be the largest of them all in these parts.

‘Maybe it’s that big guy we saw on Marie se Draai,’ I thought out loud. But putting a face to the prints did nothing to calm my racing mind – not only had he been monstrous, but he was one of those oft-photographed, black-maned Kalahari lions. Beautiful from the pages of a book, bone chilling when you can smell the dried blood clinging to the many scars etched into his cheek. That’s how close we’d been on Marie se Draai, the popular loop just outside Nossob, the northernmost camp and departure point for the exciting wilderness trail. 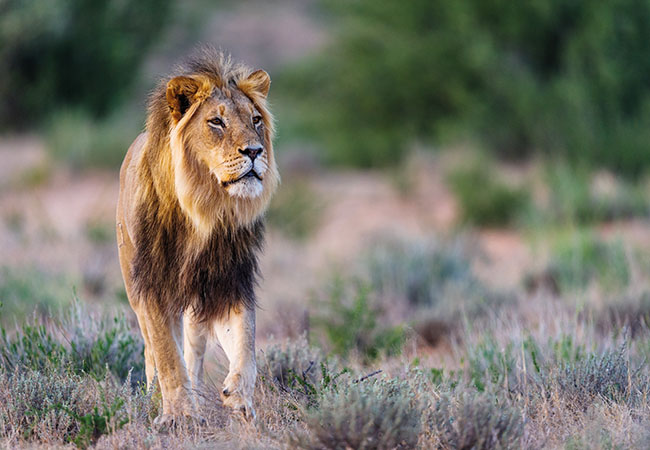 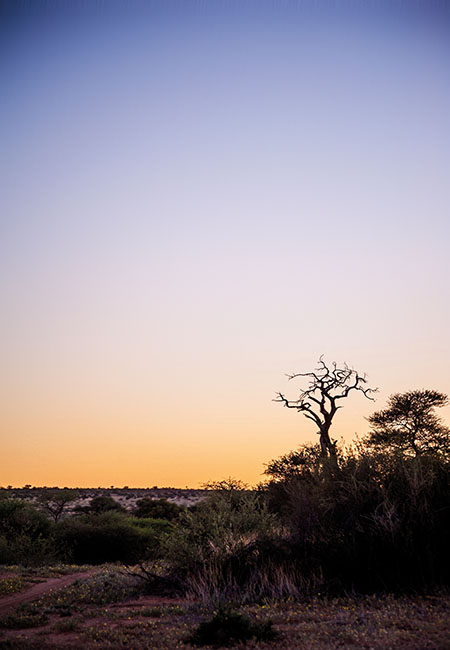 After our night, we’d refuelled and restocked at Twee Rivieren, and headed north for Nossob. Plotting a route in the Kgalagadi is simple. From Twee Rivieren, you’re faced with two choices: to head north-east to Nossob, or north-west to Mata-Mata, the third main rest camp. These routes are linked by a few badly corrugated roads that traverse the dusty dunes. (Don’t repeat our mistake and pack your precious boxes of wine and beers in the trailer. It’s not pretty.)

Located in a dry, crimson riverbed, Nossob is a three-and-a-half hour drive from Twee Rivieren, and its savannah surroundings make it perfect for skulking predators. As you cut across the park to Mata-Mata (a shorter, two-and-a-half hour drive from Twee Rivieren), the indigenous camel thorn trees get taller and the blushed sand gives way to lots of scrubby grassland and rocky outcrops. Sitting on the border with Namibia, on the banks of the Auob River, Mata-Mata is where the giraffes are, and if you’re lucky, it’s where you may spot leopard.

Perhaps it was a leopard. I traced the route, round our tent and down towards the braai, a few more prints, then…

Sketched into the sand like the work of a fine artist, I could just about make out the brushstrokes of the mane, curved body, tail. He’d slept here. With us.

‘Let’s get breakfast going so we can pack up,’ our guide announced, checking his socks for scorpions. ‘We’re heading south today.’

I sure hope our lion didn’t hear that.

There are definite sweet spots for when you should visit the Kgalagadi. Try to skip the school-holiday rush if you can, but get in there before the temperatures soar to the mid-40s, and visit between August and October. April and May are also lovely, as the calving season (around January) yields babies aplenty.

Aside from these camps, there are six unfenced wilderness camps: Gharagab, Kieliekrankie, Urikaruus, Kalahari Tent Camp, Bitterpan and Grootkolk. Not for the faint of heart, these don’t allow children younger than 12, and you’ll need a 4×4 to access them. As for the rest of the roads, sedans are not encouraged either.

Prices for each camp vary from R1 730 (for a desert tent at the Kalahari Tent Camp) to R240 (for a campsite at one of the three main camps). Conservation fees are R66 per adult per day, and R33 per child per day.

Departing every Monday, the Eco Trail is a three-night route running either from Nossob to Twee Rivieren, or Twee Rivieren to Nossob. You will need to be adequately prepared: it’s fully self-catering, so stock up on food and water (for drinking and showering), firewood and fuel. The trail covers around 50–60 km a day – this may not sound like a lot, but you’re travelling at 30, sometimes even 20 km/h, so be prepared for lengthy days in the car. You will have opportunities to stretch your legs, though – especially when the rangers ask you to help fix the ruts in the road created by the vehicles! The cost is R2 575.50 per vehicle (with no more than five in a car).
054 561 2000

The shops sell the basics, but you’ll need to do a large shop if you’re spending a few days in the park. Upington is a four-hour drive away and has a large Pick n Pay – buy your meat, dairy products, fruit and veggies there to ensure freshness.

BEATING AROUND THE BUSH - BLOUBERG, LIMPOPO