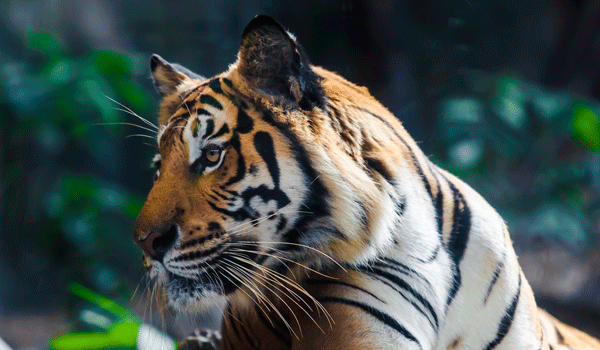 Jukani Wildlife Sanctuary near Plettenberg Bay is a retirement home for dozens of big (and not so big) cats, from dainty caracals to fierce Bengal tigers.
Marion Whitehead spoke to founder Jurg Olsen

Are all your cats rescue cases?

Yes, the story that comes with each one is a small miracle. For instance, Angelo, the white Bengal tiger, would have been killed because he’s going blind as a result of inbreeding. Spirit, the black leopard, was a surplus animal from a German zoo. Or they’re brought to us by CapeNature, like the rooikats (caracals) confiscated from farmers.

What do big cats need to be happy?

They need food, a safe shelter, place to stretch and sharpen their claws – and stimulation. We make toys for them, like balls and ‘springboks’ stuffed with grass, which they can rip to pieces.

Why is touching the animals at Jukani forbidden?

These are unpredictable, wild predators and they’re programmed to kill. Even if they’ve been hand-reared, their instinct remains and, in certain circumstances, they’ll react and use their claws. Maybe not this time or the next – but it will happen. No one asks to hold a black mamba! So why a lion?

Wouldn’t you make more money if you allowed petting?

Yes, but only in the short term. If you knew what happened to animals when they’re not cute and cuddly any more, you’d think differently. They are too expensive to keep feeding, so they end up being used for canned hunting. It’s very exploitative and the animals’ needs don’t feature. We could also triple our income by breeding and selling, but we feel that it’s wrong. Our animals are on contraceptives and we get by on our entrance fees.

How can members of the public tell the difference between petting parks and real sanctuaries?

In true sanctuaries, there’s no breeding or selling, no touching and enough space for the animals to hide if they don’t want to be seen. These are the basic criteria you must meet in order to be a member of the South African Animal Sanctuary Alliance, which recently received a gold World Responsible Tourism Award. We have a conservation-education point of view, teaching people about the animals’ situations in the world. For instance, there are 3 000–4 000 tigers left in the wild in the whole world, around 2 200 of them in India.

Do you return any of your animals to the wild?

Sending Juka and Shanti the Bengal tigers back to India would be a death sentence. Our three tawny lions were hand-reared, but we have adopted a totally hands-off approach and they may be able to go back into the wild.

What got you involved with big cats?

I have been around wildlife since the age of six, on my grandfather’s cattle farm in Limpopo. When there were problem leopards, he would catch and relocate them, rather than shoot them. Later on, when I was working for the police dog and equestrian units, I saw lions being bred on a farm specially
for canned hunting and decided to do something to change that by starting
a sanctuary for them.

What does it take to be successful in this industry?

You can’t just be passionate; you’ve got to be fanatical!

Can we talk to big cats?

Some people certainly think so. Search for ‘Spirit the black leopard’ on YouTube
to hear his moving story, as told to animal communicator Anna Breytenbach.

Tired of waste
Copyright AA traveller 2016
Back to top