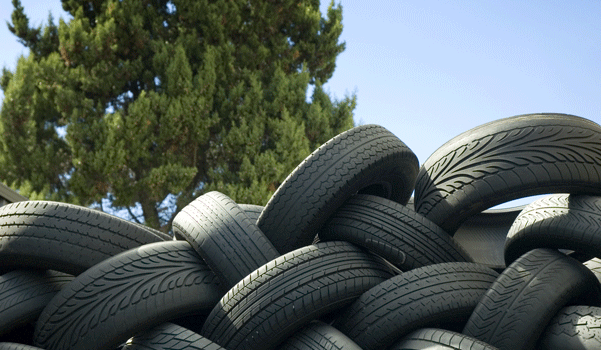 Disposing of worn-out tyres responsibly is a major headache. Now, REDISA has a plan to help the environment and the economy through recycling and job creation, explains Mike Monk

These tubes of rubber have been key to the evolution of transport ever since John Boyd Dunlop created the world’s first practical pneumatic tyre for his son’s tricycle in 1887.

Today, tyres are designed to be tough and long-lasting. However, as a vehicle’s sole contact with terra firma, the stresses and strains to which they are subjected inevitably mean a limited lifespan. And this means they end up being discarded. But then what?

Approximately 11 million waste tyres (weighing well over 0.25 million tons) are generated every year in South Africa. We simply do not yet have the resources to keep pace with clearing the build-up of unwanted tyres (currently estimated at more than 60 million in total). This has resulted in mountains of rubber being stockpiled in dumps scattered across SA in industrial, residential and rural areas.

Some waste tyres make their way to recycling facilities via either formal or informal networks of collectors, but these services are few and far between. Once collected for recycling, tyres can be broken down and the rubber crumbs reprocessed, but this is currently still an uneconomical process.

Instead, many used tyres are simply burned for their scrap-metal content, a harmful practice that releases carbon monoxide, sulphur dioxide, hydrogen chloride, toxic dioxins and furans, and petroleum by-products such as styrene and benzene into the atmosphere.

It is in light of this situation that the Recycling and Economic Development Initiative of South Africa (REDISA) was developed. It intends to simultaneously address a serious environmental problem and stimulate job creation – the aim is to create jobs in both the informal and formal sectors, while fostering BBBEE (broad-based black economic empowerment) and SMMEs (small, medium and micro enterprises).

The basis of the plan is to subsidise the collection and recycling of waste tyres by implementing a scrap value on them, thereby encouraging individuals and organisations to gather them and deliver them to authorised recycling depots for processing.

A portion of the funds generated by the non-profit project is devoted to training and support of SMMEs, with the five-year target of creating 10 000 new jobs and 200 business entities that collect, store and recycle waste tyres by 2017. As of January 2015, REDISA was operating 34 depots and had registered 1 648 dealers, created 1 705 new jobs and collected 77 614 tons of scrap tyres.

The operation is funded through a R2.30/kg levy on all tyres sold in South Africa – both locally manufactured and imported. ‘This approach puts the cost where it belongs,’ says Stacey Davidson, REDISA director. ‘If you introduce tyres into the market, you must contribute upfront to the cost of eventual disposal of the tyres.’

At this stage, the tyre industry is the only one in SA that is dealing with its waste in an integrated and coordinated way. What’s more, REDISA is the only national tyre-waste-management plan in the world that can boast 99.9% industry compliance. This means that nearly every single tyre manufacturer and importer is registered with REDISA and pays to outsource its tyre-recovery and -recycling liability to the project.

REDISA is also allocating money to research into and development of recycling processes to create products such as oils, rubber, bricks and tiles from discarded tyres. The idea is that, as the plan gains momentum, used tyres will grow in value.

‘No longer seen as waste, they will vanish from our landfills and re-enter the economy as recovered raw materials, fuel, waste bins, paving, artworks, and even fashion accessories,’ says Davidson.

Most motorists currently replace their worn-out tyres at professional fitment centres, which automatically dispose of them responsibly, in compliance with REDISA. However, individuals can also dispose of small quantities of unwanted tyres free of charge.

For more information on any aspect of tyre recycling, visit www.redisa.org.za.

Back to basics
Copyright AA traveller 2016
Back to top