The new Peugeot 2008 seamlessly blends French flair with compact-crossover convenience, resulting in a vehicle that’s at home in the cityscape and countryside

Life really can be a wonderful adventure, even if you live in the urban jungle. That’s the philosophy behind the all-new Peugeot 2008 (‘two thousand and eight’ is how you should say it), an exciting and compact addition to the French brand’s crossover range, and a perfect accompaniment to the larger 3008.

The 2008 takes what its big brother offers and presents it in a more compact form. This means you get an elevated driving position and increased ground clearance to help you take command of your environment, roof racks so you can easily carry your lifestyle accessories with you and a host of user-friendly cabin features.

These include a : rear bench-seat with one-touch fold, a sound system with Bluetooth connectivity, USB and 3.5 mm aux inputs, an aviation-style handbrake that frees up space between the seats and a refrigerated cubbyhole. You also get Grip Control, an intelligent system designed for managing traction to enhance the vehicle’s ability when the tarmac ends – or has already long disappeared behind you.

As the name suggests, the 2008 is based on the 208 B-segment hatchback, which has been at the forefront of the marque’s local sales successes for the past 18 months. There is just a single model offered at launch: the 2008 Allure, which is driven by a punchy 1.6l powerplant, with 88 kW only a tap of the foot away. And, with consumption of 5.9 l/100 km and emissions of 135 g/km, it’s both lean and clean.

The new 2008 also boasts the 208’s impressive levels of safety and security. Drivers will find Peugeot’s ubiquitous six-pack of air bags, as well as essential anti-lock braking and electronic stability programme, along with cruise control with speed limiter, to reduce the driver’s workload and delay the onset of fatigue. On top of this, they will enjoy handy features such as electrically operated and heated side mirrors and remote-controlled central locking.

For most consumers, however, the key selling point of the 2008 will be its combination of space and modularity: for example, the total load volume can be expanded from the standard 360l below the luggage cover to as much as 1 172l . In the boot, the low-loading sill, sextet of securing hooks, elasticated storage nets and other practical features make this the perfect vehicle for family motoring. Heightening the overall impression of space is a panoramic glass roof.

And, best of all, the 2008 is sold with a full-house ownership experience: the Peugeot Premium Plan. That means all servicing and maintenance is covered for the first 60 000 km or five years. Plus, it is sold with the standard three-year / 100 000 km warranty.

With heaps of comfort and plenty of power, it may not change the city’s highways and high-rises into wide open spaces, but the 2008 will at least add a sense of adventure.

Peugeot’s 3008 range has just been given a facelift and, along with it, received a new, affordable Access specification, bringing the entry point for the range to below the R300 000 mark. With the existing Active and Allure, prospective customers now have a choice of three specification levels and three drivetrains: two petrol and one turbo-diesel.

The new 3008 can be identified by a new grille treatment, with the same styling cues first seen on the 508 sedan and then on the 208/2008. The rear-light clusters have had a makeover too and now have a more three-dimensional look. 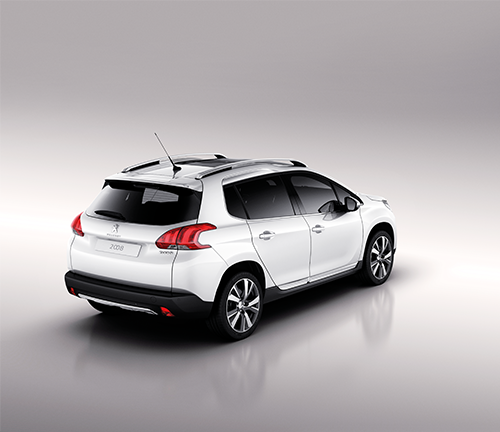